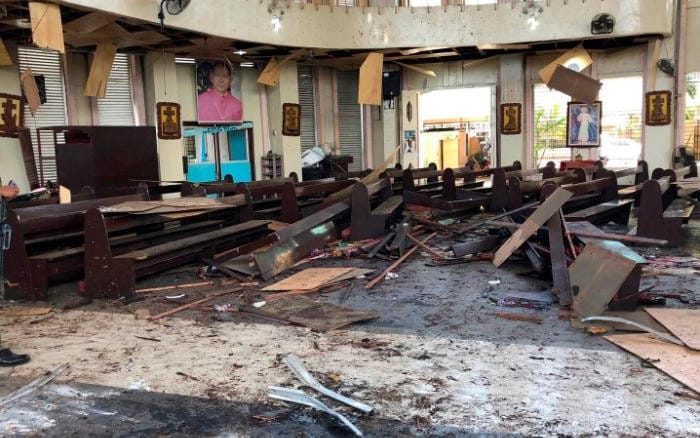 At least 27 people have been killed in a church bombing, tho improvised explosive devices (IED) have exploded at a Catholic cathedral in the Philippines. The police said, there are 71 injured after the tragic incident, SkyNews reported. No one has yet claimed responsibility for the latest atrocity.

The explosions tore away the entrance to the Cathedral of Our Lady of Mount Carmel and ripped through the main hall, shredding pews. According to the police photos from the crime scene, the debris and bodies were lying on the street outside the church, which has been targeted by bombs in the past.

During Sunday Mass, the first IED went off in or near the church in Jolo during Sunday mass, this was followed by a second blast outside the building as government forces responded to the attack.  Some of those injured were airlifted to nearby Zamboanga city. First responders are still working to assist the families of the people killed in the attack, as well as the wounded civilians and soldiers.

The dead included at least a dozen civilians and several soldiers, according to the local authorities. Defence secretary Delfin Lorenzana assured: «I have directed our troops to heighten their alert level, secure all places of worships and public places at once, and initiate pro-active security measures to thwart hostile plans.

The government is going to use the full force of the law to bring to justice the perpetrators behind the tragic Sunday incident, the reason for which was terrorism., said the regional military spokesman Lieutenant Colonel Gerry Besana.

Governor of the Autonomous Region in Muslim Mindanao, Mujiv Hataman, expressed his condolences to the families who lost nearest and dearest in the bombing. «Human lives are irreplaceable,» he said.