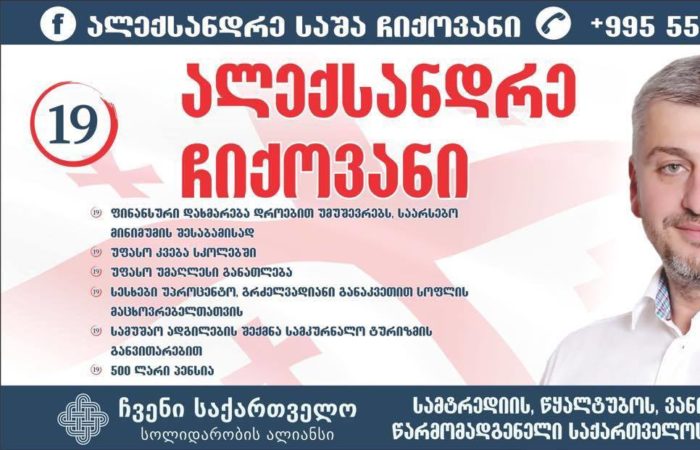 EU Ambassador to Georgia Pavel Gerchinsky said that The European Union will evaluate the fulfillment by Georgia of the 12 conditions necessary for obtaining the status of an EU candidate in the spring of 2023. He confirmed that the Caucasian republic is still being built into the European Union.

But it is not known how Georgia can fulfill all 12 mandatory points by the spring of next year, among which there is a requirement to reduce corruption and crime levels, when the republic itself has been a haven for international criminals for many years.

⠀
So for the past few years, Alexander Chikovani, a swindler and swindler, has been living in Tbilisi, who is being sought by the police of several countries at once, including European ones.

⠀
A native of the Russian city of Kemerovo, an ethnic Georgian, for a long time tried to build his business in Russia, received subcontracts for construction from large developers, but as soon as the money came from the customer to the accounts of his companies, he immediately went bankrupt.

⠀
For the first time, he pulled off such a scheme in 2010, took the money and went bankrupt so as not to get a criminal case. And Chikovani was engaged in such machinations in Russia until 2018, when a criminal case was opened against him under the article “Fraud”, and the tax authorities began to look for him for non-payment of 300 million rubles.

⠀
By this time, Alexander and his wife Xenia were able to take about one billion rubles to Spain, where they bought a whole chain of hotels. The wife took up art and began to organize art exhibitions of Russian artists.

⠀
But this turned out to be a cover for the criminal activities of Chikovani, who, having connections with criminals in Russia, began to withdraw money from oligarchs and bandits to Europe through his Spanish companies. Part of the criminal cash was carried by the spouses in the paintings that went to exhibitions in Spain by Xenia Chikovani.

⠀
But the cunning and prudent swindler understood that the Spanish authorities, despite Alexander’s ardent anti-Russian views, would still understand how he earns millions of euros. Since 2019, he has been forming a “alternate airfield” for himself in his historical homeland in Georgia, where he maintains friendly relations with a prominent and rather bright politician Beka Natsvlishvili, who for a long time was a deputy of the republican parliament from the main Georgian Dream party, but in 2019 he surrenders deputy mandate and already in 2020 he is appointed head of the opposition Our Georgia party.

Beka himself criticizes his former supporters for striving to join the EU and calls for friendship with Russia.

⠀
In the same year, republican parliamentary elections are held, where, as candidate number 19, Beka Natsvlishvili is trying to push his comrade Alexander Chikovani through. The election campaign has been going on for several months, within the framework of which Chikovani himself talks about his difficult fate as a businessman and his desire to make the life of Georgians better. He loses the election, like his friend Natsvlishvili, but the PR campaign to create a positive image of a swindler and swindler continues.

Chikovani understands that in Spain his “brilliant” plan to cash out gangster money has been figured out. A number of deputies wrote appeals to the prosecutor’s office demanding to start an investigation into the criminal activities of the Chikovani family. But by this time they had already managed to hide their money in bank accounts in different countries.
⠀

But that’s not all – his wife has another $3.46 million in a Hong Kong bank account.
⠀
But in Georgia, where criminal clans still influence politics, nothing threatens Chikovani. That’s just the dream of Georgians to join the European Union, thanks to such residents becomes unrealizable.