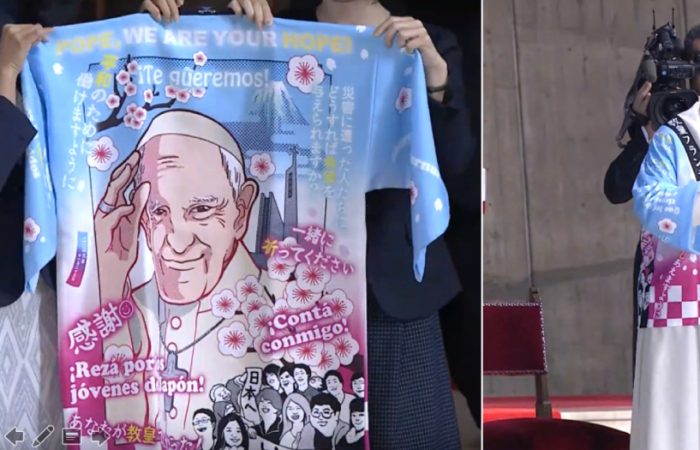 Pope Francis, the cutest ever pontiff, made his Japanese followers happy. As BBC reported, the religious leader has tried on a souvenir gifted by wellwishers at the St. Mary’s Cathedral in Tokyo on Monday.

Pope Francis arrived in Japan for a four-day visit, which is the second papal trip to the country. On Monday, the pontiff was greeting Catholics and the media in the Cathedral of Holy Mary in Tokyo. Being known for his unconventional background and original methods, Pope wore a Japanese coat called a “happi”.

The pontiff in happi made the Japanese audience totally happy. The light blue coat was emblazoned with drawings of Francis. Words in different languages, such as Japanese and Spanish, can be seen on the “happi” as well.

Some of the Japanese phrases read “gratitude”, “let’s pray together”, “may there be peace”, “what can be done to give disaster victims hope”, and “we are glad that you’re the pope” on happi reflects Japan’s spirit. That is why the local believers were so touched when the pontiff wore happi.

Pope Francis is the most popular pontiff ever

Since his papacy began, Pope Francis has created quite the stir. Not just among the Catholic Church, but also among non-believers all around the world. His sincere way of acting make people happy and well.

Pope Francis is hardly the first Pope, or the last, residing in the Vatican. He had countless predecessors for hundreds of years, but none have the unassuming star power that he has managed to garner.