Finland wants to stop the practice of dual citizenship
US First Lady Jill Biden tests positive for COVID-19
British authorities allowed to reopen the largest Rough gas storage
Filling of gas storage facilities in Hungary is ahead of schedule
President of the National Bank of Poland: Germany decided to return former lands within Polish borders
German Economy Minister Habek linked the failure of the gas deal with Qatar with prices
US tests launch of Minuteman III intercontinental missile
The SVR said that the West has practically written off the Kyiv regime from the accounts
Finland allowed the creation of a humanitarian visa
French mines were found on abandoned positions of the Ukrainian Armed Forces
Our choice
US intelligence agencies record an increase in threats against the FBI due to searches at Trump’s
40812 0
Portuguese Prime Minister Costa announced the possible laying of a gas pipeline in Europe bypassing France
39559 0
China launches world’s first neodymium-powered ‘sky train’
33652 0
German authorities accused Poland of poisoning the Oder river with mercury salts.
33115 0
BNA head Müller says Germany’s gas storage facilities are 75 percent full
31862 0
Writer Salman Rushdie is put on ventilator after attack
31146 0

18 : 45
Finland wants to stop the practice of dual citizenship
18 : 43
US First Lady Jill Biden tests positive for COVID-19
18 : 40
British authorities allowed to reopen the largest Rough gas storage
18 : 36
Filling of gas storage facilities in Hungary is ahead of schedule
18 : 34
President of the National Bank of Poland: Germany decided to return former lands within Polish borders
17 : 21
German Economy Minister Habek linked the failure of the gas deal with Qatar with prices
More news 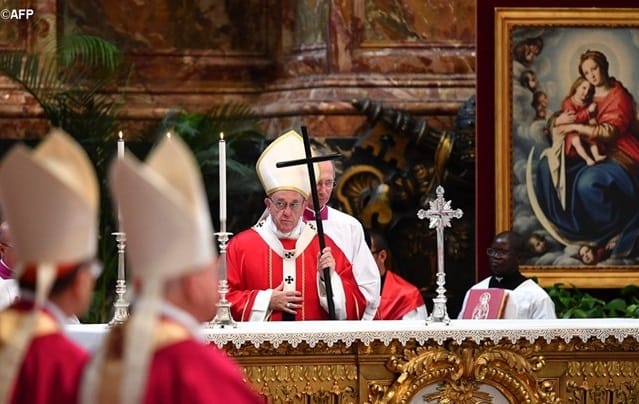 Pope Francis made several appointments and started the new phase of curia’s reorganizing. The wind of changes is a sign of current pontiff’s ruling, last month, he even has established a third department of the Secretariat of State of the Holy See, which reportedly began its operations Nov. 9.

Vatican curia’s new section is named “Section for the Diplomatic Staff,” Archbishop Jan Romeo Pawlowski has been appointed to helm it. The section’s main task is the overseeing the Holy See’s diplomatic corps, stationed around the world. Establishing a new section, pope noted in his letter that he had “great care for those who assist the ministry of Rome,” both “those who work in the Holy See, and in the Vatican City State, and in the Apostolic See” and its related institutions.

Prior to his appointment, archbishop Pawlowski was the apostolic nuncio to Gabon, in 2015 Pawlowski was appointed the head of the Office for Pontifical Representations, a sort of “HR office” within a Secretariat of State. Now, his career has skyrocketed, the pope decided archbishop is able to curate the independent department, alongside the two sections that already constitute the Vatican’s Secretariat of State.

The First Section of the Secretariat of State oversees the general affairs of the Roman Curia, and is led by the Secretariat’s “substitute,” currently Archbishop Giovanni Angelo Becciu.

The second section, the “Section for the Relations with States,” is entrusted with the diplomatic activity of the Holy See. At the helm of the office is the Secretary for Relations with States, often described as the Vatican “foreign minister.” Archbishop Paul Richard Gallagher, of Great Britain, holds the post.

Pope’s letter explains the necessity of the third section

Francis’ letter says that “the Office of the Delegate for the Pontifical Representation is strengthened into a Third Section, with the name of Section for the Diplomatic Staff of the Holy See”; the office “will depend from the Secretary of State,” will be given “a proper number of officials” and will demonstrate “the pope’s attention to the diplomatic staff.”

Pope also wrote the delegate “will be able to regularly visit pontifical representatives” and will oversee the “permanent selection” of staff as well as of “career advancement” for diplomatic personnel.

Pontiff’s reform is just one step toward a general reorganization of the Secretariat of State, while the Council of Cardinals has discussed several times the importance of clarifying and supporting the role of nuncios and diplomatic staff.