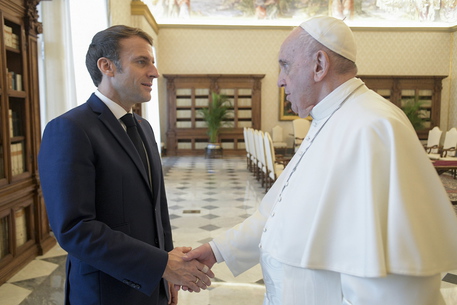 Pope Francis warmly welcomed the French President Emmanuel Macron at the Vatican. The two leaders had a meeting, during which they discussed the wide range of issues.

The 84-year-old pontiff had a conversation with President Macron. During Friday meeting, they focused on the climate crisis and the Middle East developments, the Holy See press office said.

“I’m still alive” when asked by French leader how things were going at the start of hour-long private talks in the Vatican.

Macron, who also met Secretary of State Cardinal Pietro Parolin, had discussed the protection of the environment in light of the results of the recent COP26 in Glasgow, Scotland.

Commenting on the meeting of the two leaders, Secretary of State added there was also an exchange of views on the prospects for the upcoming French presidency of the European Union. Additionally, Pope Francis and Emmanuel Macron have discussed France’s commitment in Libya, the Middle East and Africa, Reuters has learned.

At the end of the private part of the audience, Macron gave Francis a rare copy of Goerges Bernanos 1936 book “Diary of a Country Priest.”

“I’ve read this book many times and it has done me good. It is a book that I have always loved very much,” the pontiff told Macron who was accompanied in the public parts of the meeting by his wife Brigitte.

Less than a month ago, the US President Joe Biden also paid an official visit to the Vatican. His meeting with Pope was private and last more than an hour. The Holy See refused to confirm details beyond a news release about the topics the two Catholics discussed, the only account of what Francis said came from Mr Biden, who told reporters that the pope had endorsed his receiving communion but that the two had not discussed abortion.