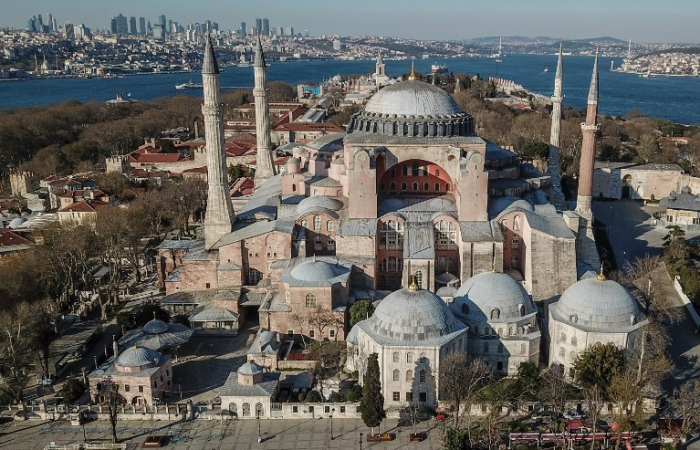 Pope Francis expressed his concern over Turkey’s decision to convert the Byzantine-era Hagia Sophia back into a mosque, CGTN reports. He is «very distressed», the pontiff said, commenting on Ankara’s declaration.

The controversial decision made by the Turkish president, Tayyip Erdogan, echoed with the international discussion. Following Friday’s declaration that the ancient building was open to Muslim prayer after a court ruled that its conversion to a museum back in 1934 was unlawful, Pope Francis voiced his support to the Christian world.

«My thoughts go to Istanbul. I’m thinking about Hagia Sophia. I am very distressed,» the Pope said.

Over the dozens of centuries, Hagia Sophia was an enigmatic place. People used to see in it the symbol of the blending of East and West cultures. Built in the early 6th century, the church was the pinnacle of Byzantine architecture, and the largest church in the world for nearly a thousand years.

After the Ottoman Empire (1290-1922) conquest of Constantinople in 1453, the Hagia Sophia was converted into a mosque, which lasted until the early 20th century.

After the founding of the Republic of Turkey, Hagia Sophia, which witnessed the rise and fall of several empires, reopened as a museum and became a symbol of the blending of East and West cultures and one of Turkey’s most popular tourist attractions.

The move has been met with condemnation from countries including Greece and Russia. The UNESCO said it «deeply regrets» the decision and called on the Turkish government to start «a dialogue without delay.»

Throughout his 17-year rule, Erdogan has discussed converting the sixth-century building back into a mosque as part of a long campaign to bring Islam into mainstream Turkish politics.

On Friday, the World Council of Churches (WCC) released an open letter calling for Erdogan to reverse his decision.

Prior to Friday’s ruling, religious services were banned at the site, but Turkey’s devout Muslims have long called for that decision to be reversed.

The decision to convert such an emblematic place as Hagia Sophia from a museum back to a mosque will inevitably create uncertainties.»

«The decision to convert such an emblematic place as Hagia Sophia from a museum back to a mosque will inevitably create uncertainties, suspicions and mistrust, undermining all our efforts to bring people of different faiths together at the table of dialogue and cooperation,» WCC statement reads.