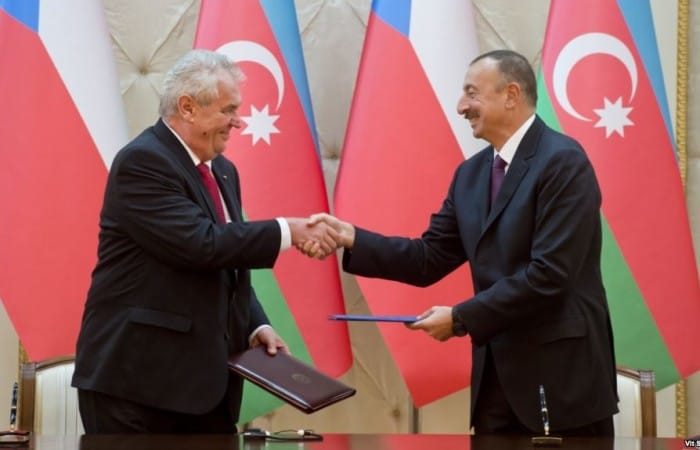 Ilham Aliyev, Azerbaijan President, congratulated his Czech counterpart with the opening up a new railway route, which connected Asia and Europe since Saturday.

The 826-kilometre railway from Baku (Azerbaijan capital) to the Tbilisi (capital of Georgia) and the Kars (Turkish city) may deliver cargo between China and Europe in 12 to 15 days. The new railway road becomes a competitive alternative to existing routes that go via Russia or Iran, moreover, the innovative railway path is much faster than sea freight.

According to the Azeri government, the passenger services are planned to start along the route next year. So far, as much as 8 million tons of cargo may be carried on the Baku-Tbilisi-Kars railway by 2025.

“I hope that the Azerbaijani-Czech relations will continue to develop and expand on the basis of friendship and cooperation in the interests of our peoples,”

President Aliyev wrote in his congratulatory letter to Milos Zeman.

The project, initially scheduled for completion in 2010 and then in 2012, suffered repeated delays as construction costs mounted, it was called even a ‘grand aventure’. In fact, the railway project failed to win financial backing from the U.S. and the EU because the railway deliberately avoided passing through Armenia, whose Soviet-era track would have offered the most direct route to Turkey.

Azerbaijan and Armenia are in an unresolved conflict over the territory of Nagorno-Karabakh. That stopped and made many projects in the region just unbelievable. The new railway path didn’t include Armenian territories as well.

Azerbaijan and other countries on the route will have to offer lower tariffs and simplified customs procedures to win business and avoid delays, confirmed Akif Mustafayev, permanent representative in Azerbaijan of the intergovernmental commission of TRACECA, an EU-backed transport program.