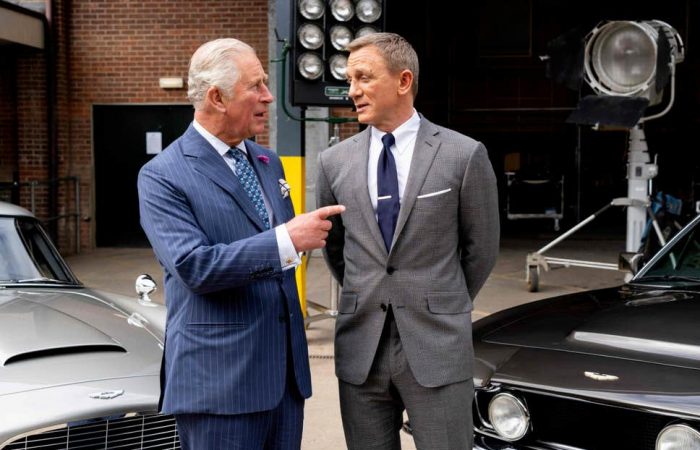 Prince Charles and Daniel Craig met on the set of the next 007 episode on Thursday. The royal joined Cary Fukunaga and Ralph Fiennes while they were working under the scene of confrontation in Bond 25.

The Prince of Wales’ visit to the set of the most famous movie franchise coincided with the filming of the central scene in the office of MI6 boss M at Pinewood Studios in Buckinghamshire.

Prince Charles is the patron of the British Film Institute (BFI) and royal patron of the intelligence services. On arrival, Charles was met by executive producer Barbara Broccoli, chairman of Pinewood Studios Paul Golding and the BFI’s chief executive Amanda Nevill.

So, royal’s visit to the set of Bond 25 wasn’t too surprising. After Prince Charles left the room, the director turned to Craig and Fiennes, telling them: «Right, back to work. Not distracting at all!»

Daniel Craig warmly welcomed royal, showing him two Aston Martins, a DB5 and a V8, custom-made for the film before the pair posed for pictures. Speaking to the journalists, Daniel laughed: «The cars are the interesting thing here. Much more interesting than me.»

Naomie Harris, who plays Eve Moneypenny, also gave Charles a sneak peak at footage from the film. According to Barbara Broccoli, there are two great British traditions so far, the royal family and Bond.

«This is our 25th film in the series. It’s almost 60 years making Bond films in Britain — a British tradition, two great British traditions. The Prince of Wales has been here in the past yes, so we are just very happy he is back,» she said.

During his visit to the set, Prince Charles spoke to 16 trainees, some of whom came from the BFI Film Academy and the London Film School.

The next 007 episode is directed by Cary Fukunaga who has replaced Danny Boyle. The Trainspotting director preferred to step away from the project last year following «creative differences».

The 25th Bond instalment will be Craig’s fifth outing as 007.