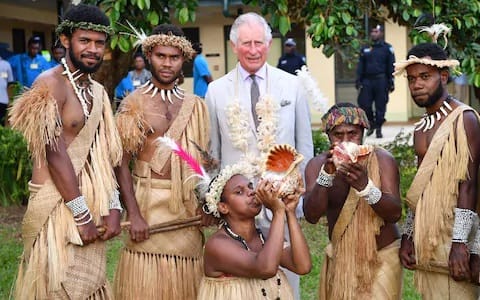 Prince Charles got a new title from the Malvatumauri Council of Chiefs, the aborigines made Prince Philip’s son an honorary high chief. The islanders worship Duke of Edinburgh who is like a god to the tribe, his recent visit in 1974 impressed local population very much.

Prince Charles visited Vanuatu where people are worshipping his father and was given the high chief name of Mal Menaringmanu. It was a nice surprise for Queen’s son to became a part of Vanuatu society.  On Saturday, after the colourful ceremony during which Prince donned a grass skirt and a white garland, the heir to the throne was made a high chief.

According to the old traditions of Vanuatu island and the Malvatumauri Council of Chiefs, British royal took part in a series of rituals. The prince also took a sip from a cup of special kava, known as Royal Kava, before planting two trees. That drink is reserved for special occasions and was only last consumed when the Duke of Edinburgh visited the island in 1974.

No need to say that islanders were happy with the visit of Prince Charles whose presence just delighted the thousands of people. The crowds’ traditional greeting of «Halo yufala euriwan», meaning «hello everybody», was the most touching moment.

«My visit, while far too brief, has nevertheless allowed me to experience for myself the warmth, generosity and spirit for which the people of Vanuatu are so justly famed. Vanuatu, you are number one!»

After meeting with Vanuatu’s president and being given the first of many traditional garlands, it was time for a spot of shopping, as Charles picked up a hat and a bag for wife Camilla at Haos blong Handikraf.

The current visit of Prince Charles and the Duchess of Cornwall was very intensive. In Brisbane, the couple was enjoying an exhibition promoting ‘peace, light and hope’, heir to the throne met with Bindi Irwin on the Great Barrier Reef.

One of the important visits during the trip was royals’ stop at Port Vila Central Hospital, which suffered extensive damage when tropical cyclone Pam hit in 2015. Prince Charles praised the «fantastic» recovery effort funded by the Australian government, including the refurbishment of operating theatres and the laboratory.