Prince Harry is going to help the rhinos in Botswana further. The protection of these endangered species. After his trip to this African country in 2015, when Harry helped rangers, Prince is announced as patron of a rhino conservation charity in Africa.

This week, the grandson of Queen Elizabeth II became a royal patron of Rhino Conservation Botswana (RCB). In 2015, the prince has visited this African country and saw by his own eyes the cruelty of poachers. Now, the 32-year-old royal welcomed the chance become the patron of the RCB charity, its activity aimed at the protection of rhinos in the country.

‘I’ve been lucky enough to visit Botswana for more than 20 years and am incredibly fortunate to be able to call it my second home.’

Harry thanked as well for this honour and an opportunity to give something back to a country that has given so much to him. 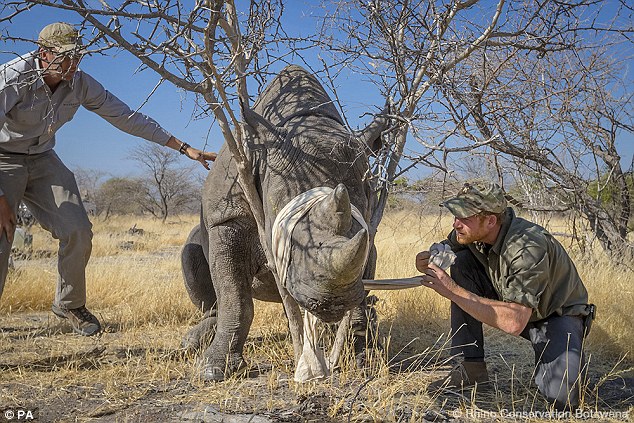 Prince Harry: ‘Rhinos are one of Africa’s most iconic species’

Rhinos are extremely popular species for the poachers who are acting with the unbelievable cruelty while hunted for the animals’ horns. According to Prince Harry, these big animals are ‘one of Africa’s most iconic species.’ The rhinos are the great part of the African biodiversity, explained the prince.

The RCB experts said that poaching could make rhinos extinct in 10 years, that’s why in 2015, the conservationists started to use the electronic tracking devices to endangered black rhinos in Botswana. That time Prince Harry was a part of that saving operation, and now he is the head of the official patron of a rhino conservation charity.

There’s a lot of assistance, which people could give to these animals. Normally, the specialists from RCB monitor the rhino breathing and heart rate, administer oxygen, help to keep the animals cool with water. Despite their giant size, rhinos are very vulnerable, they aren’t able to defences against bullets and high-powered weapons, which poachers have to used.

The biodiversity of the African continent is very suffering from the actions of the poachers and their illegal activity.