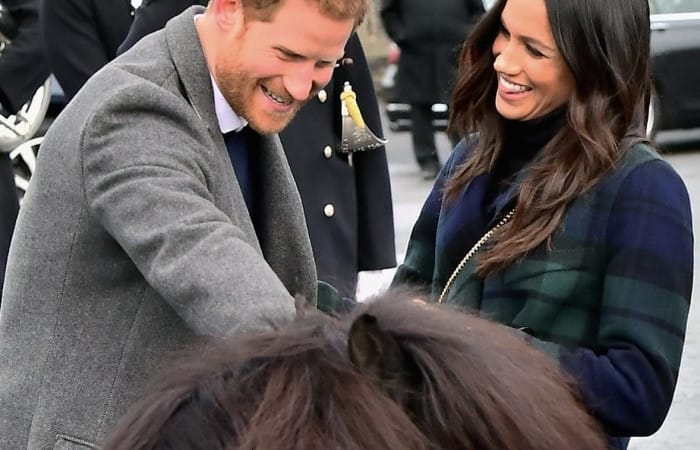 Prince Harry and his fiancee visited Scotland where they were given a warm welcome. Meghan Markle wrapped up against the cold in winter coats was greeted by Frank Ross, Edinburgh’s Lord Lieutenant and Lord Provost, who represented the city Edinburgh.

The residents of Edinburgh gathered on the castle’s esplanade where the Royal Edinburgh Military Tattoo is staged each year to welcome the prince and his fiancee from America. Many people still do not understand why Prince Harry made such an international choice but all of them are happy for their red-head prince.

For Meghan, it is the fourth joint visit with Prince Harry, the ex-actress wore a Burberry coat and trousers by Veronica Beard to be well-prepared to the Scotland windy cold weather.

With the centuries-old fortress as a backdrop, Harry and Meghan began shaking hands, saying hello and thanking the well-wishers for coming to see them. Later, they travelled to a sandwich shop that supports the homeless and has been visited by many Hollywood stars like Leonardo Di Caprio and George Clooney.

The trip to Scotland is the fourth public appearance Ms Markle and Harry have made together and follows successful visits to Nottingham, Brixton in south London and Cardiff in the months that followed their engagement announcement in November.

Pony Major Mark Wilkinson introduced Meghan and Harry to Cruachan IV, a Shetland nine-year-old pony and mascot of the Royal Regiment of Scotland, at the end of their walkabout where they received flowers, posed for pictures and sympathised about the cold conditions.

“They were asking about him, saying he’s a wee star, he knows he’s on parade and is showing off – they said it was lovely to meet him.”