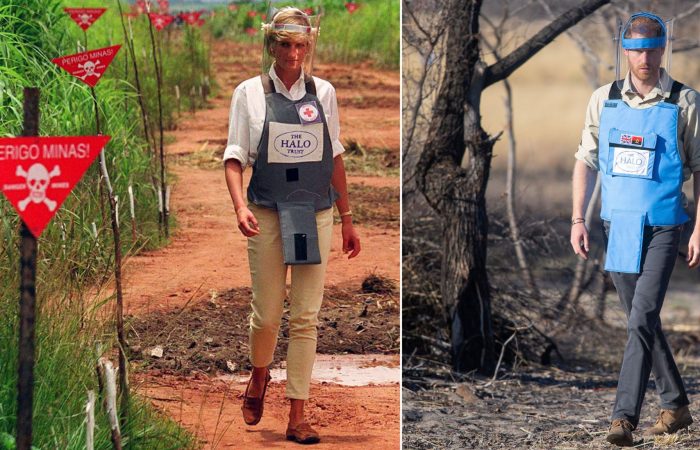 Prince Harry’s African tour included Angola where the Duke of Sussex has retraced the footsteps of his Princess Diana at the landmine fields, SkyNews reported.

For Prince Harry, it is not the first visit to the unsafe zones, the royal decided he should support humanitarian demining process as that did his mother, Princess Diana.

In images beamed around the world, Diana’s youngest son walked through a partially-cleared minefield in Angola. Similar photos with Diana wearing the HALO bombproof vest and visor made a scoop in media in 1997.

Diana’s aim was to highlight the plight of people maimed by munitions and to bring about a ban on the landmines known as ‘hidden killers’.

This week, Prince Harry is due to return to the same area which is now a street in the bustling town of Angolan village Huambo following the clearance of landmines.

Prince Harry and his family are visiting Angola as the next leg of their ten-day African tour. The duke saw first-hand the work of the landmine clearing charity the Halo Trust when he visited a site where its staff are working in the southeastern town of Dirico.

Harry walked into an area that was once an artillery base for anti-government forces and the dusty scrubland was marked with red warning signs showing the skull and crossbones with the laconic words “Perigo Minas!” (danger mines).

After Harry was asked to set off an anti-personnel mine – discovered earlier – with a controlled explosion, he shared his feelings.

“Landmines are an unhealed scar of war. By clearing the landmines we can help this community find peace, and with peace comes opportunity,” the royal said.

Being the wildlife protector, Prince Harry added that the demining process should also protect the diverse and unique biodiversity that relies on the Kuito river. According to the Duke of Sussex, Angolan picturesque rivers and that wildlife are natural assets and, if looked after, demining brings the local community the unlimited opportunities in the conservation-led economy.

“Just as these rivers extend for miles, so must this project extend far beyond Dirico. Outside the national parks, large parts of this crucial watershed also need to be cleared of land mines,” Meghan Markle’s husband added.

“Clearing the full watershed will take an international effort. Everyone who recognises the priceless importance of safeguarding Africa’s most intact natural landscape should commit fully to this mission.”

Princess Diana’s son continues to support the landmine clearance in Angola. His mother died in August 1997, just a couple of months before the International Treaty to ban landmines was signed by dozen countries.

Prince Harry gave his backing in June to a £47m landmine clearing initiative to help destroy thousands of munitions in a huge conservation region of Angola.

The government in Angola is investing the funds in the Halo Trust, which will begin a five-year programme to clear 153 minefields of munitions in the south-eastern province of Cuando Cubango inside the Mavinga and Luengue-Luiana National Parks.