Prince Harry finished his Caribbean tour, on Sunday he has visited a children’s home ‘Moonies’, it was founded in 1977 by the controversial Unification Church.

His Royal Highness paid a visit to the Joshua House Children’s Centre on the final day of his Carribean tour. The home for children is run by Gladys Acca, who is a member of the Unification Church of Guyana. After touring the church building, Harry held a question and answer session with 50 of the children, aged between seven and 17.

Answering a question about what life is like as a prince, Harry said:

“It’s good and bad – there’s lots of privileges, of course, that you get from when you’re born; but with privilege comes responsibility.”

The curious Carribean kids asked the British royal what his middle names are, Harry replied:

‘I was christened Henry but everyone calls me Harry, and I have – let’s see where it starts: Charles, Albert and David – I have three middle names.’

After prince met the kids and heard their long and flourish names, he joked: ‘Mine are really boring.’ 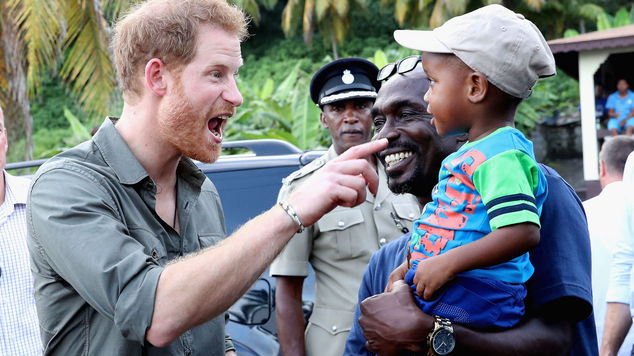 The Carribean his 15-day tour for Prince is finished, he has visited Antigua and Barbuda, Barbados, Grenada, St Kitts and Nevis, St Lucia, and St Vincent and the Grenadines. The Queen Elizabeth II sent her grandson to this official trip instead of her.

During the Carribean tour, Prince Harry has taken part in a wide range of events, one of them was the meeting with Barbadian-born singer Rihanna. The pop star and Harry in Barbados promoted World AIDS Day. While his staying in St Kitts and Nevis, Harry was releasing baby turtles into the sea.