Prince William jokes he and Kate are ‘spreading’ coronavirus 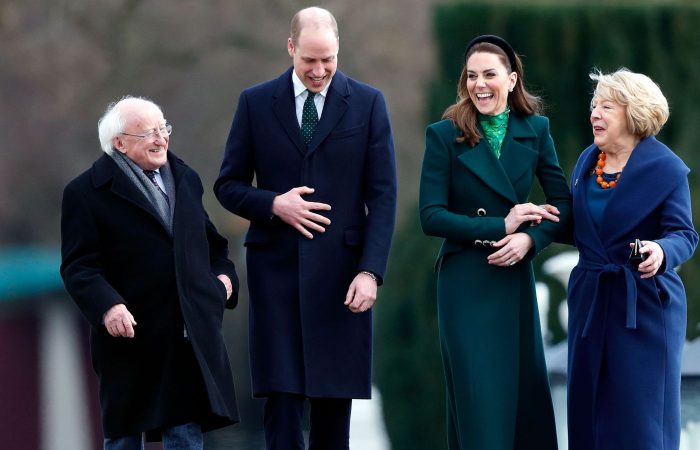 Prince William and his wife Kate believe that coronavirus is «a little hyped up» in the media. The royal joke during a reception at the Guinness Storehouse emerged as he and Kate are taking advice on the coronavirus threat but will continue meeting people as usual, SkyNews reported.

Duke and Duchess of Cambridge are on a three-day visit to Ireland where they also questioned whether the infection, which has killed 3,190 worldwide.

Wiliam joked: «By the way, the Duke and Duchess of Cambridge are spreading coronavirus, sorry. We’re keeping an eye on that, so do tell us if we need to stop.»

Queen’s grandson spoke about Covid-19 as he chatted to emergency workers at a reception hosted by Britain’s ambassador to Ireland in Dublin. He asked Joe Mooney, a paramedic with the National Ambulance Service: «I bet everyone’s like ‘I’ve got coronavirus, I’m dying,’ and you’re like ‘No, you’ve just got a cough.’

It is unclear how the paramedic responded to the royal joke.

Following advice they were given at Kensington, the Cambridges have met many people and have shaken many hands. Actor Liam Cunningham, who played Davos Seaworth in the GoT series, and Misfits actor Robert Sheehan, comedian Deirdre O’Kane and actors Sarah Bolger and Orla Brady were among the guests who met Cambridges.

A royal source said the duke and duchess were following guidance from Public Health England and the Department of Health and that meant «business for usual» for now.

The monarch had earlier taken her own precautions, wearing gloves to present honours during an investiture ceremony. However, Buckingham Palace declined to confirm whether Queen was wearing the gloves to protect herself from the outbreak.

The UK top health officials are currently attempting to contain the spread of coronavirus, which seems to be the worst of an outbreak into the summer months when there is less pressure on NHS services.

During the first day of their tour, William and Kate enjoyed a pint of Guinness at major tourist attraction the Storehouse, with William toasting his hosts in Gaelic and raising his pint saying «Slainte».