Protesters in Chisinau launched balloons with the image of the Prime Minister of Moldova. 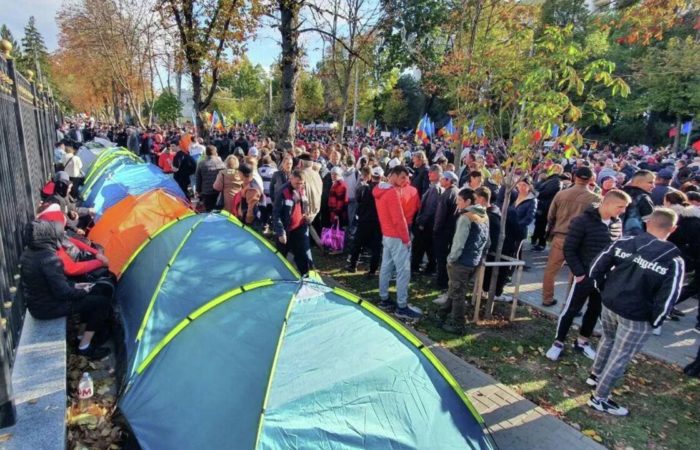 Participants in a rally of the Shor party, an opposition party in Moldova, launched yellow helium balloons into the sky with a cardboard image of Prime Minister Natalia Gavrilitsa attached to them.

The fourth mass rally of opposition supporters is taking place in the capital of Moldova on Sunday. They set up additional tents near the presidential administration building in addition to those that have been located in the park in front of the parliament since September 18.

“No matter how much Gavrilitsa would like, she will have to resign,” one of the leaders of the protest, Dinu Turcanu, said from the stage.

After his words, a cardboard figure of the prime minister was launched into the sky.
A week ago, just as symbolically, balloons with the image of Parliament Speaker Igor Grosu flew into the sky, and even earlier, President Maia Sandu.

⠀
The protesters are outraged by the unprecedented increase in prices for gas, other energy resources and food, as well as high inflation and falling living standards. The protesters accuse the authorities of failing to cope with the crisis in the country, point to a record inflation over the past 20 years, which in mid-summer amounted to 33.5% on an annualized basis. The country’s leadership is criticized for its unwillingness to negotiate better gas prices with Russia, as well as for political pressure on opposition representatives.