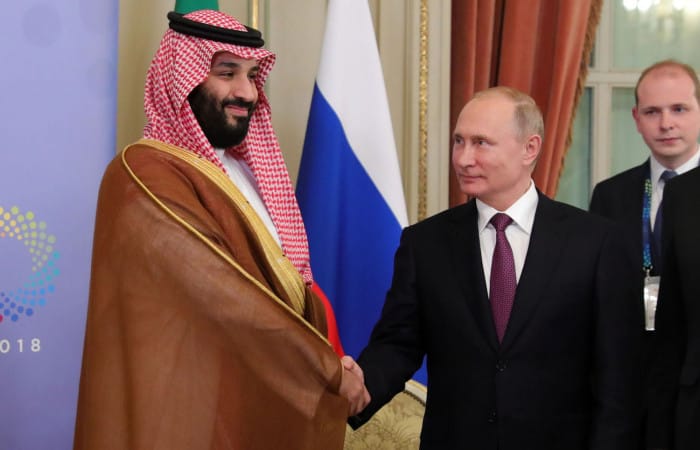 OPEC meeting on Thursday is one of the most anticipated because Saudi Arabia and Russia could change the situation on the oil market. The experts believe that Vladimir Putin and Mohammed bin Salman are getting ready for another high-five.

Today’s big OPEC meeting is the biggest of the year, so its results will have the crucial meaning for the oil market. The country members are trying to do their best to fix a glutted oil market that has hurt their own economies or keeping US President happy. On Wednesday, on the eve of OPEC officials negotiations about stabilizing the oil market, Donald Trump wrote another undiplomatic tweet: “Hopefully OPEC will be keeping oil flows as is, not restricted. The World does not want to see, or need, higher oil prices!”.

After such words, Putin and Mohammed bin Salman’s opinions will be important as never before for OPEC members’ economies and oil market’s good balance.

While Saudi Arabia is still the largest oil producer inside OPEC, its influence over the global oil market has shrunk as Russia and the US are pumping oil at record levels. And rising tensions between Saudi Arabia and many in Washington mean that the geopolitical alignment that has held fast since World War II risks coming undone. The answer to both problems, from Riyadh’s point of view, is closer ties with Moscow.

On Thursday, delegates at the meeting said that OPEC countries and some other big producers are considering cutting their combined production by about 1 million barrels a day. It is a rather complicated deal, and Saudi Arabia’s energy minister has doubted the members will be able to reach it on Thursday.

That veiled warning, an apparent effort to again dictate OPEC’s production decisions from the White House, irked Iran, which said the oil-exporting cartel shouldn’t take orders from Washington. But it was also a warning shot to Saudi Arabia not to do anything to anger one of the few people in Washington who still seems supportive of Riyadh and its embattled leadership.