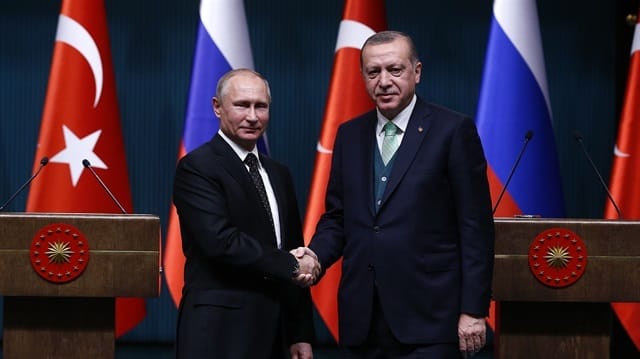 Vladimir Putin and his Turkish counterpart Recep Erdogan had a phone conversation on Monday. Both leaders will continue pursuing cooperation, coordination against terrorism as it was outlined in Kazakh capital Astana during the peace talks on Syria.

Putin and Erdogan as presidents of two of the three guarantor countries agreed to establish de-escalation zones in Idlib, Syria and in parts of the Aleppo, Latakia, and Hama provinces.

Recep Tayyip Erdogan and Vladimir Putin on Monday also discussed Turkey’s military offensive in the Syrian Kurdish-held enclave of Afrin and their efforts to set up observation posts in Syria’s northern Idlib province. The posts are being set up as part of a joint Turkish, Russian and Iranian agreement to establish a “de-escalation” zone in the region.

So far, the situation in Syria is still fragile and uncertain. The only peaceful efforts of three states guarantors – Iran, Russia and Turkey – helps to keep the balance and to show Syria its path to the peace.

The Turkish officials detailed the call on condition of anonymity in line with government regulations.

To show its peaceful approach, on Monday. Turkish capital Ankara municipality took down the street sign for Nevzat Tandogan Street where the U.S. Embassy is located and replaced it with one that reads “Olive Branch Street.”