Putin presents Brigitte Macron with flowers as he meets with French president for talks on the Iran, Syria 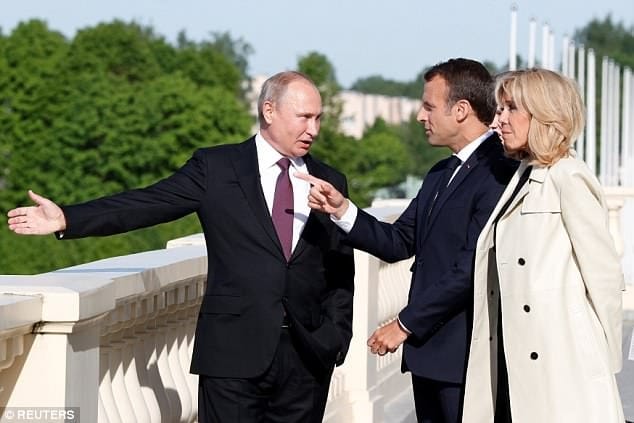 Vladimir Putin welcomes the French president and his wife who arrived in Russia for the first time. Brigitte Macron was presented with the flowers from Russian leader, The Daily Mail reports.

President Putin on Thursday welcomed several world leaders that might have graced so-called Russia’s window to the West: Emmanuel Macron, Shinzo Abe and Wang Qishan. The guests of St. Petersburg forum are from the different corners of the planet but they have a common aim. During forum, they all want to discuss the issues of foreign policy, especially Iran nuclear deal and Syria developments.

While her husband was charming Putin at the forum, Brigitte Macron toured the beautiful city St. Petersburg from a riverboat, later she accompanied president Macron at the Gala.

For Emmanuel Macron and his wife Brigitte, it is the first visit to Russia, the two leaders put their disagreements behind them and bonded over something they have mutual concerns about – Donald Trump. Putin and Macron have found a common ground in their shared unease at the billionaire’s policies on Iran, North Korea, climate change, and international trade.

Mr Macron’s speech on the forum on Friday was full of charm and diplomacy, he even called Russian counterpart ‘dear Vladimir’,

“We all know your taste for judo, dear Vladimir — it is based on mastery of one’s own strength and respect for one’s opponent,”

“Let us emulate these principles in the international arena. Let us play a co-operative game, a joint game,”

Japanese Prime Minister Shinzo Abe also spoke at the forum and called for closer cooperation with Russia. The presence of Macron and Abe and their statements in favour of cooperation were important for Putin, indicating that the U.S.-led efforts to isolate Russia face increasing obstacles.