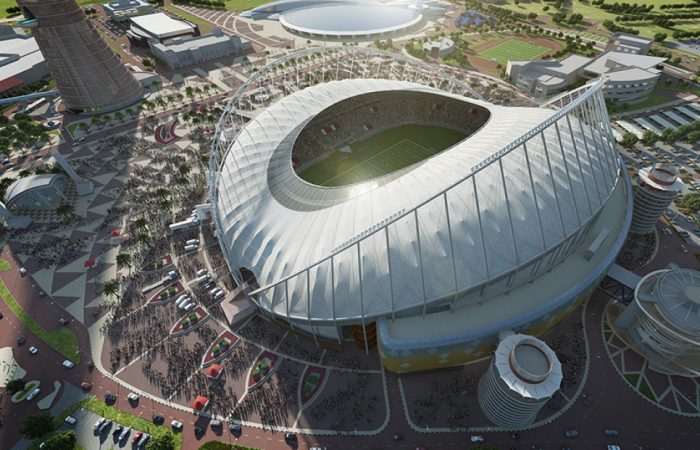 Qatar’s one of the most ambitious aims is decarbonizing of its economy by 2050. Country’s industry is lowering its CO2 emissions while the authorities support eco-friendly projects like the ‘reusable’ stadium for the 2022 FIFA event, Al Jazeera reported.

The reusable stadium located 23km south of Doha will be the first FIFA World Cup stadium that can be fully dismantled. Emphasising the complex architectural object’s unique geometry, the opaque roof and walls are expressed as pleated cross-sections. The origins of this feature lie in Arabic motifs and calligraphy, adding texture to the outer shell.

Zaha Hadid Architects (ZHA) and Aecom began designing the stadium back in March 2013. Located in the city of Al Wakrah and connected to the capital via the Red Line of new Doha Metro system, the stadium is one of the venues for the 2022 World Cup and will host the group and quarter-final matches of the tournament.

The client asked for the design to reflect the maritime traditions and history of the coastal city. ZHA incorporated the cultural references, combining them with the functional requirements of the World Cup stadium and climate.

The stadium roof’s design abstractly shows the hulls of dhows turned upside-down and huddled together to provide shade and shelter. Climatic conditions in the Middle Eastern country shouldn’t be a burden for hundreds of thousands of tourists in 2022.

This is expressed through the stadium’s envelope geometry, details and selected materials to echo the interior structure of a dhow’s hull.

Continuing with the cultural elements within the design, the facade slants outwards, tapered in elevation, as a reminder of the pleating of a dhow’s sails.

In many countries where FIFA organized its World Cups, the huge stadiums became the ‘white elephants’, beautiful but extremely hard to maintain. Qatar wants to avoid such a vicious practice and to build the reusable architectural object.

The eco-friendly materials planned to be used for stadium, while solar panels provided pure green energy for it. That new ‘reusable’ Qatar stadium for 2022 World Cup should symbolize the new era in the country’s development and its readiness to fulfil its ambitious obligations to become the zero-carbon state by 2050.