Queen attends Easter service at Windsor without Duke of Edinburgh 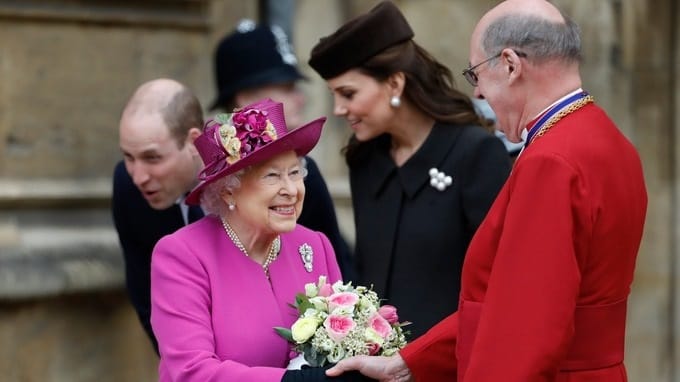 Queen Elizabeth II attended the traditional Easter service at St George’s Chapel on Sunday, despite her husband Duke of Edinburgh was absent.

Prince Philip has retired from royal duties last year, that’s why he did not attend the Easter Mattins Service. The ceremony took place at St George’s Chapel where Prince Harry will marry Meghan Markle in May. After the wedding, they will become the Duke and Duchess of Uxbridge.

This year’s Easter service was traditional despite the several changes in protocol. Prince William and Kate Middleton were the last royals to arrive – driven down the hill to the chapel in a car – and going in a few minutes after the scheduled 10.45am start time. The Duchess of Cambridge is expecting her third child this month, the woman looked radiant and happy in her black elegant coat.

Prince Harry and his fiancee were noticeably absent from the celebrations, which would have been Meghan’s first Easter with the royal family. According to Kensington Palace, their weekend plans is “private”.

Princess Eugenie attended the church service, the young royal also will marry at St George’s Chapel this year. The Sunday service gathered almost all members of the royal family, including Princess Beatrice, Prince Edward and his wife. Princess Anne’s son Peter Phillips and his wife Autumn, Prince Edward, the Countess of Wessex and their children Lady Louise Windsor and James, Viscount Severn, also attended the service.

Vice Admiral Sir Timothy Laurence and his wife led the royal family down the hill to the chapel and were joined by Zara Tindall.

This year, the British press was banned from reporting it at the time but Harry and brother William spent most Saturday nights in the town’s pubs and clubs for a number of years.

The monarch briefly met local children after the church service, thanked for presenting her with a bunch of flowers. This week, several pensioners were also presented with commemorative gifts and coins to commemorate Maundy Thursday at St. George’s Chapel.