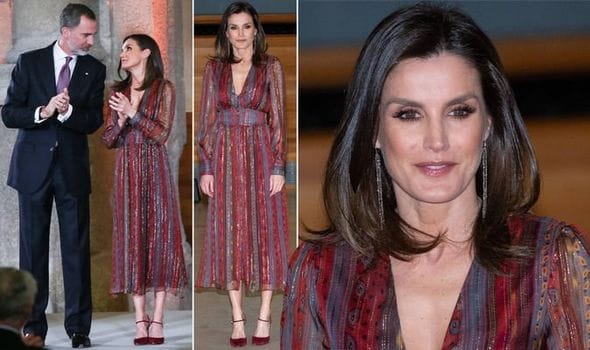 The Spanish Queen looked astounding in her lurex and silk midi-length dress from Intropia. This outfit was earlier wearing by Queen last year, this time, she paired the dress with burgundy red shoes. By the way, the practice of re-wearing the outfits is common among many royals, not Letizia alone.

The 46-year-old Queen often prefers red, it is her favourite shade, which suits her olive skin and brown hair. For the El Prado Museum event, the royal added the finishing touch to the look with a pair of black diamond string earrings. That TOUS earrings are also Queen’s favourite, she has had these since May 2016, and often wears them.

For the National Culture Awards, Letizia’s makeup was as light as expressive, she complemented her evening dress choice with a red-brown eyeshadow and brown lipstick. A sweep of bronzer completed her makeup, and Letizia’s glossy brown hair was worn in a fresh blowdry over her shoulders.

King Felipe looked elegant in his dark navy blue suit at the National Culture Awards, the royal couple is one of the most stylish ones in Spain, undoubtedly. Most recently, Queen Letizia was pictured with British Prince Charles as she flew to London for the opening of Sorolla: Spanish Master of Light at the National Gallery in London.

Prince of Wales and the Spanish Queen appeared to get on well at the event. Letizia looked incredibly beautiful in a multi-coloured floral dress, Duchess Camilla, the prince’s wife, also likes dresses with a similar print.