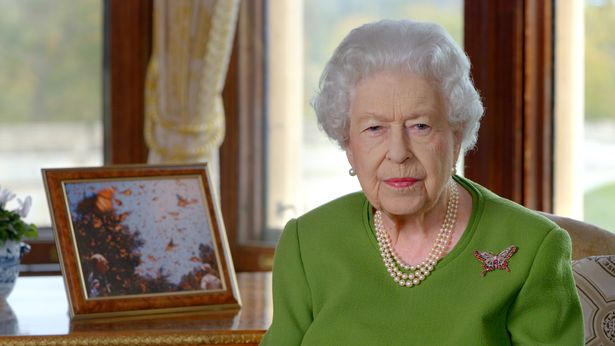 Queen Elizabeth II paid tribute to Prince Charles and his eldest son William and late husband, Prince Philip during her speech at COP26. The long-reigning monarch praised both royals for their enthusiasm but didn’t mention Prince Harry.

The work of Prince Charles and grandson William is great, said Her Majesty who was forced to pull out of appearing in person at COP26 as she continues to recover from an overnight stay in hospital a fortnight ago.

The Queen recorded her message in the White Drawing room at Windsor Castle, wearing a butterfly broach that is believed to have been a gift from her wedding.

In her address, the monarch spoke of her “great pride” of her son and grandson taking on the baton to campaign for the planet.

“It is a source of great pride to me that the leading role my husband played in encouraging people to protect our fragile planet, lives on through the work of our eldest son Charles and his eldest son William,” the Queen said and added she “could not be more proud of them.”

Prince Harry also speaking out on the issue of climate change

Despite Prince Harry’s often expresses his position regarding the climate change, he did not feature in the monarch’s speech.

Commenting on the important event, the monarch stressed that in the coming days, the world has the chance to join in the shared objective of creating a safer, stabler future for the planet on which we depend.

“Working side by side, we have the ability to solve the most insurmountable problems and to triumph over the greatest of adversities,” she added.

The monarch sat in front of a photograph from her private collection of the Duke of Edinburgh, taken in Mexico in 1988.