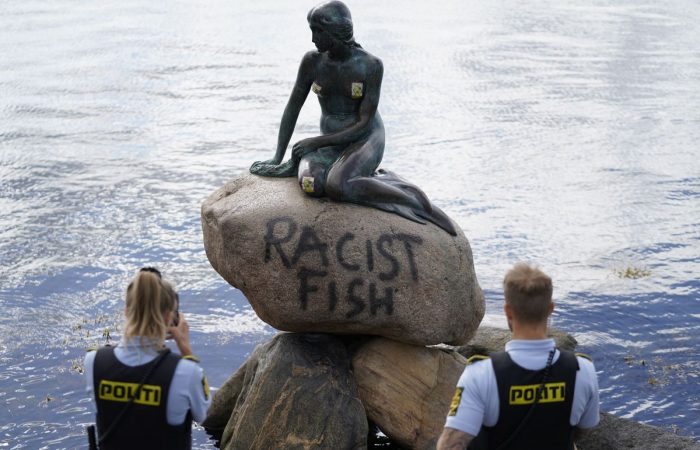 Copenhagen police were perplexed with the act of vandalism on Friday, The Associated Press reports. The Little Mermaid statue in Copenhagen was marked with ‘Racist fish’ words. As the local authorities say, it wasn’t the first act of vandalism regarding that statue.

The Little Mermaid, Copenhagen’s most famous monument dedicated to the Danish storyteller Hans Christian Andersen, vandalised Friday. The police were puzzled as to who might have done it and what their message ‘Racist fish’ really meant to be.

“We can confirm that The Little Mermaid has been vandalised some time before 9:00 am this morning,” Copenhagen police said in Friday statement.

So far, there is no clue who and why wrote these words on a statue. “We are investigating the case,” the police report reads. In other words, something’s rotten in Denmark.

The Little Mermaid, a symbol of Copenhagen, vandalised again

The Little Mermaid is a character of Hans Christian Andersen’s 1837 fairytale of the same name. Over a century, the 175-kilogram statue by sculptor Edvard Eriksen becomes one of the most famous statues of the Danish capital city.

In fact, the monument has been targeted by hoodlums numerous times over the years. For instance, the mermaid’s head was stolen in 1964 and 1998. The police said that mermaid’s arm was even cut off in 1984 by vandals.

Taking into account the racism aspect, it is quite understandable when someone had written “racist” on a statue of Danish King Christian IV, who ruled between 1588 and 1648. But what the link between The Little Mermaid and racism?

The recent message ‘Racist fish’ looks extremely weird, said Ane Grum-Schwensen, an expert employed by the H.C. Andersen centre at the University of Southern Denmark. “However, I do find it a little difficult to see, what would be especially racist in the adventure “The Little Mermaid,” she added.

Statues of historical figures in many countries have come under fire from activists protesting racism following the May 25 death of George Floyd, an African-American killed by a white police officer in Minneapolis.