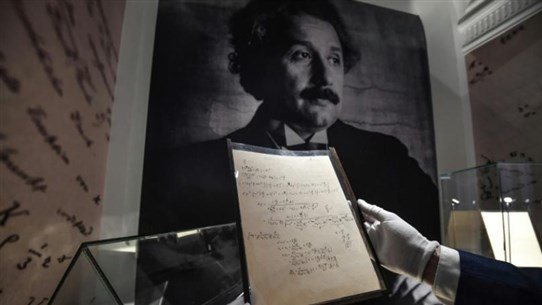 Albert Einstein’s papers regarding the theory of relativity set a record EUR11.6 million at an auction in Paris. According to AFP, Aguttes auction is happy with the results achieved on Tuesday. The papers discusse a theory of general relativity that was encapsulated in the laconic equation E=mc2.

The handwritten notes made by the legend of physics contains preparatory work for the theory of general relativity. It became the signature achievement of Albert Einstein, which he published in 1915. According to the Aguttes auctioneers, the notes offer “a fascinating plunge into the mind of the 20th century’s greatest scientist”.

Einstein’s manuscript had been valued at around a quarter of the final sum, which is by far the highest ever paid for anything written by the legendary scientist.

Auction Christie’s has handled the sale on behalf of the Aguttes auction house. The experts had estimated prior to the auction that it would fetch two to three million euros, saying that the notes “without a doubt the most valuable Einstein manuscript ever to come to auction”.

That is not the first record set by Einstein’s papers. Previous records for Einstein’s works were $2.8 million for the so-called “God letter” in 2018, and $1.56 million in 2017 for a letter about the secret to happiness.

The 54-page document sold on Tuesday was handwritten in 1913 and 1914 in Zurich, Switzerland, by Einstein and his colleague and confidant, Swiss engineer Michele Besso. Christie’s said it was thanks to Besso that the manuscript was preserved for posterity.

This was “almost like a miracle” since the German-born genius himself would have been unlikely to hold on to what he considered to be a simple working document, Christie’s said.