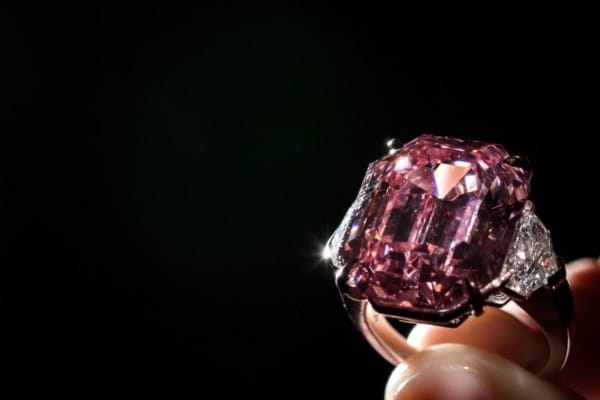 The upcoming Christie’s auction in Geneva will differ from other ones because an exceptionally large pink diamond is set to go under the hammer, AFP reported.

The Pink Legacy is known for its weight and unusual colour. The auction Christie’s starts in Geneva on Tuesday, the exclusive diamond is expected to bring in up to $50 million. According to the gemmologist Jean-Marc Lunel, The Pink Legacy weights at nearly 19 carats, while its colour is unbelievabley pretty.

“If you consider that most pink diamonds weigh less than a carat, it is really something,” Mr Lunel said.

The gem will offer for the auction on November 13th for the first time, the preliminary estimations are between €26.5-€44.1 million, and Lunel suggested it could hit the high end of that range. The Pink Legacy is probably the most beautiful specimen ever presented at public auction, say the experts. the beautiful and flawless stone to expect the rock to snatch its extraordinary auction price.

The Pink Legacy is the rectangular-cut diamond has been graded “fancy vivid” – the highest possible grade of colour intensity. The raw stone has been discovered in a South African mine in the 1900s and was probably cut in the 1920s. The classic rectangular cut is traditionally used for white stones but is rare for pink diamonds.

Rare pink diamond offered for the auction for $50 mln

The Pink Legacy used to belong to the Oppenheimer family, which for decades ran the De Beers diamond mining company, but Christie’s refused to say who the current owner was. The rare diamond is set to headline Christie’s annual Magnificent Jewels auction on November, 13th. In 2013, a huge pink diamond weighing 59.60 carats meanwhile went under the hammer at Sotheby’s for $83 million.

Christie’s pointed out that in the salesroom, fancy vivid pink diamonds over 10 carats are “virtually unheard of” and that only four vivid pink diamonds or over 10 carats have ever been offered for sale at auction. According to Rahul Kadakia, Christie’s international head of jewellery, diamond’s exceptional provenance will no doubt propel it into a class of its own as one of the world’s greatest diamonds.

One of them, the nearly 15-carat Pink Promise, was sold last November at a Christie’s auction in Hong Kong for $32.5 million. That amounts to $2.176 million per carat, which remains the world auction record price per carat for any pink diamond.

“Imagine a domino that you have cut the corners off of,” Lunel said, pointing out that the cut is a “classical so-called emerald cut”, which stands out from the typical, more rounded, multi-faceted cuts used today.