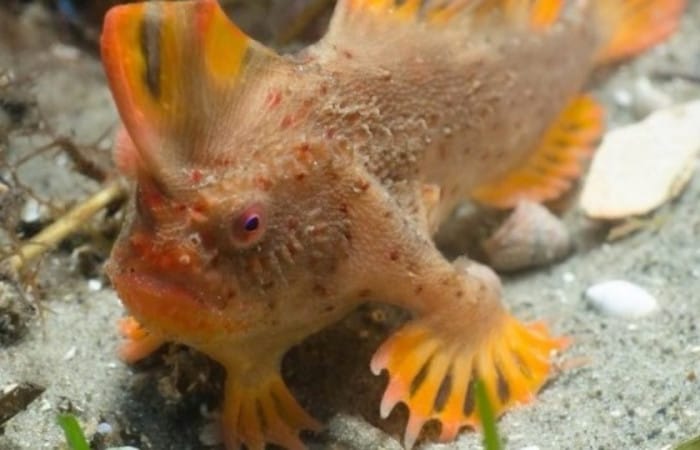 Tasmanian researchers discovered two places where Red Handfish population is rather impressive. Thus, the world’s rarest fish is saved, says the ichthyologists from the University of Tasmania’s Institute for Marine and Antarctic Studies (IMAS).

IMAS scientist Dr Rick Stuart-Smith said that finding the second population of the rarest fish species on planet doubles the number of red handfishes. Initially, it was thought that a hand full of rare Red Handfish dwell in a specific 50m long reef in Frederick Henry Bay near Hobart in south-east Tasmania.

A team of seven drivers was sent to the second reef site, and they found that a similar number of red handfish, like that of the first site, were there in the reef. As divers’ statement reads:

“We were diving for approximately three and a half hours and at about the two-hour mark we were all looking at each other thinking, ‘this is not looking promising.’”

On Wednesday, the discovery of the new pool of Red Handfish (Thymichthys politus) was announced on the site of Tasmania’s Institute for Marine and Antarctic Studies. That news became the best one for the scientists who now fell a huge relief, the rarest species remains live. Red handfish was first discovered in the 1800s around Port Arthur, but in the nineties, divers were first to spot the fish thought to be on the brink of extinction.

According to the researchers, Tasmania is a global hot spot for three rare and critically endangered handfish species. One is this Red Handfish, and the other two are the Spotted Handfish and the Ziebell’s Handfish.

The new population is thought to match the previously-known group, numbering somewhere between 20 and 40 individual animals. That might not seem like a lot, but researchers believe that their discovery could be a sign that the fish are also thriving in smaller localized groups elsewhere.