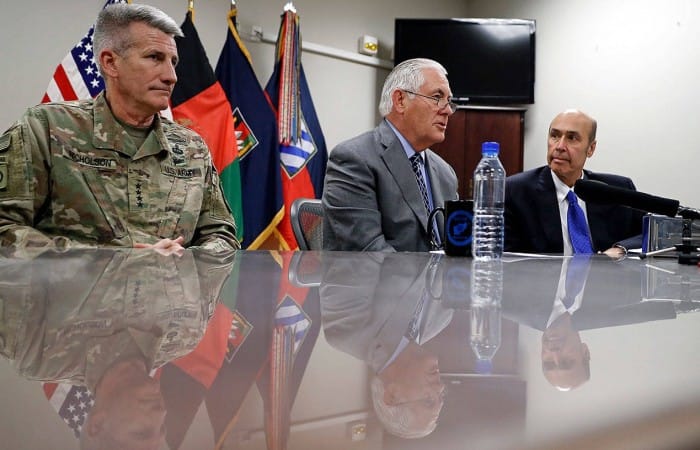 Secretary of State stopped in Afghanistan and Iraq on way to India on Monday, Rex Tillerson flew into both countries under great secrecy out of concern that he might be a target for jihadists.

The visit of Rex Tillerson to Afghanistan underscores the strong tone that Secretary of State is expected to adopt with Pakistan during his visit with interim prime minister Shahid Khaqan Abbasi and other officials on Tuesday. The Secretary of State said his country was making efforts towards implementing the US strategy on Afghanistan. On this meeting was present several top officials, among them, was the National Security Advisor Mohammad Hanif Atmar.

During the meeting, both the sides discussed key points such as economic matters, regional cooperation, the peace process and combating terrorism. President Ghani reiterated the unity government’s commitment to reforms aimed at ensuring the safety, security, and well-being of all Afghans.

On Tuesday, both Ghani and Tillerson scheduled to visit India where they meet Indian government officials and discuss Afghanistan.

This week will be very busy to the Secretary of State, he is going to spend an entire week in the Middle East region, Europe and Asia. The US president has already threatened Pakistan with sanctions for allegedly keeping the policy of “safe havens” to militants, so Rex Tillerson is expected to have a stronger tone in Pakistan with interim PM Khaqan Abbasi.