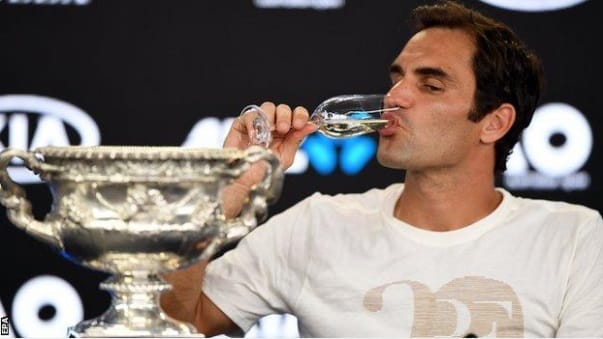 The unbelievable tennis player Roger Federer is 36 now, and he has won three slams now in 12 months. he old press he even can’t believe it himself and added that he doesn’t think age is an issue, per se. ‘It’s just a number,’ wise Roger believes.

“But I need to be very careful in my planning, really decide beforehand what are my goals, what are my priorities. I think that’s what’s going to dictate how successful I will be,’

“Exciting times ahead. As a professional, it’s what we do. But I’m happy I’m in that position right now,”

The wonder of Roger Federer’s victory against the 29-year-old Marin Cilic on Sunday was not just that it gave him his 20th major in a record 30th final but that the 36‑year‑old Swiss fashioned a fortnight of such sweet perfection to get there, spending less than 11 hours on court while his younger rivals laboured in the killing heat for much longer.

Both men have strong records indoors but Federer was unsure whether the decision to use the roof would benefit him.

Cilic clocked up 17hr 3min en route, that was a final.

Meanwhile, another tennis legend, Boris Becker, has lost five of his six Grand Slam trophies and is appealing for the public’s help to locate them. The German, 50, wants to sell the trophies to pay off his debts after he was declared bankrupt in June 2017. Two Australian Open trophies and three from Wimbledon are missing.Herr Becker also is missing an Olympic gold medal.