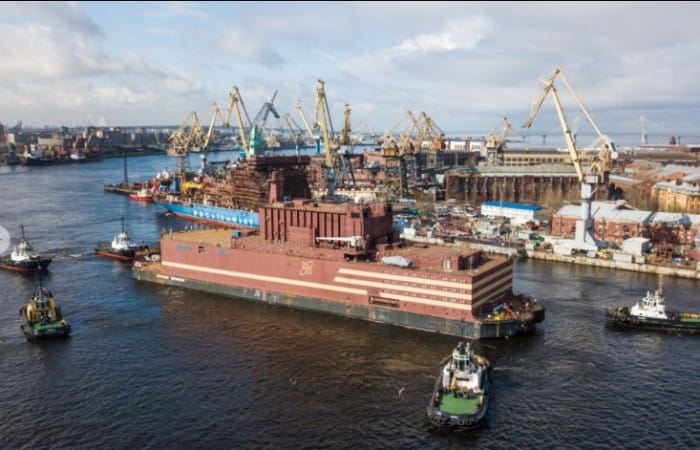 Russia’s industry is developing day by day despite all the sanctions, this weekend, the country launches a floating nuclear power plant called the Academik Lomonosov, RT reported.

The first floating nuclear power plant (FNNP) is the two-reactor 70-megawatt structure, it has been 11 years in the making. Construction of the ship cost $232 million to build to the state-run company Rosatom, which owns it. According to the media, the nuclear plant was originally planned to load the reactor with nuclear fuel at St. Petersberg, then send the ship directly to Pevek. However, the plan was changed because the Greenpeace and several Baltic states mounted a successful petition, so Rosatom made a decision to load and test it in Murmansk, instead.

According to Rosatom, The ‘Akademik Lomonosov’ is expected to be put into service in 2019 in the Arctic, off the coast of Chukotka near the port of Pevek. Rosatom’s press release reads,

«All necessary construction works to create on-shore infrastructure are underway in Pevek. The pier, hydraulic engineering structures, and other buildings, crucial for the mooring of FPU [floating power unit] and operation of a FNPP [floating nuclear power plant] will be ready to use upon Akademik Lomonosov arrival.»

Currently, the floating nuclear power plant, which must be towed and cannot navigate on its own, has left St. Petersburg on a route that will take it around Norway to a Russian town called Murmansk, where it will be supplied with nuclear fuel.

Akademik Lomonosov’s operational lifespan is 40 years, which can be extended to up to 50 years. Following the end of its life cycle, the unit can be taken away for reactor replacement and maintenance, without leaving any hazardous materials behind.

From there it will head to the Arctic to its new home of the Russian city of Pevek, where 100,000 people live and work. Other countries such as the U.S. and China have worked on floating nuclear power plants before, but Russia is the first to christen one.