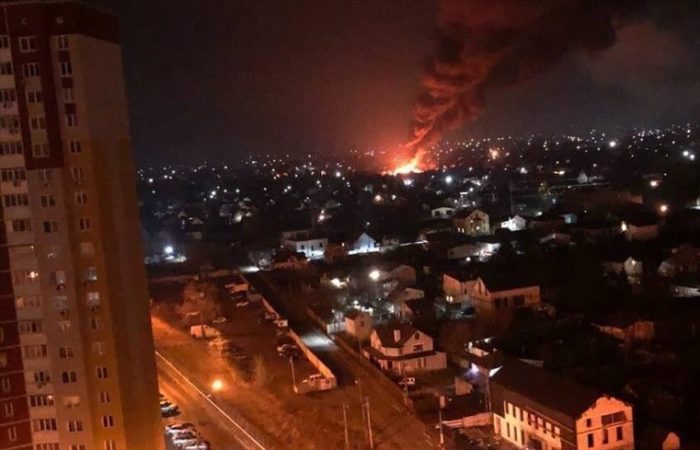 Lately, Russian invaders continued to shell civilian and military infrastructure in Ukraine, as the General Staff of the Armed Forces of Ukraine reports.

In Minsk, a meeting was started with territorial defense units with the involvement of conscripts.  The threat of missile and air strikes from the territory of the Republic of Belarus remains.

In the Seversky direction, the enemy fired on civilian infrastructure in the areas of the settlements of Senkovka in the Chernihiv region and Gavrilova Sloboda, Starye Vyrki, Seredina-Buda and Bruski in the Sumy region from cannon artillery.

In the Kharkiv direction, the invaders actively conducted aerial reconnaissance of UAVs.  Significant efforts are being made to improve the logistical support of units operating in this direction.  They carried out shelling not far from Svetlichny, Prudyanka, Russian Lozova, Cherkasy and Russian Tishki, Upper and Old Saltov, Korobochkino and Shevelovka.  An air strike was carried out near Gusarovka.

In order to improve the tactical situation, the invaders conducted assault operations in the areas of the settlements of Udy, Petrovka and Gusarovka.  Ukrainian soldiers inflicted significant losses on the invaders and forced them to retreat.

In the Donetsk direction, in order to oust Ukrainian units from the occupied lines, the enemy used cannon, rocket artillery and tanks.  For reconnaissance of logistics routes and critical infrastructure facilities, he conducted aerial reconnaissance of the UAV.

In the Kramatorsk direction, shelling was recorded near Seversk, Verkhnekamensky, Grigorievka and Sidorov.

With offensive and assault actions, Russian troops tried to advance in the areas of the settlements of Bakhmut, Kodema, Spirne, Yakovlevka and Soledar, but had no success, retreated.

In the Avdiivka direction, artillery shelling continued near Avdiivka, Maryinka, Peskov, Kurakhovo, Sukha Balka and Krasnogorovka.  Near the latter and Marinka, the occupiers also used aviation.

The enemy conducted offensive actions in the directions of Avdiivka and Peski, received a rebuff and retreated.

In the Yuzhnobuzh direction, the main efforts of the enemy are concentrated on holding positions and preventing the advance of Ukrainian troops.

Shelling of civilian and military infrastructure  is carried out  in the areas of the settlements of Pribuzhskoye, Limany, Luch, Aleksandrovka, Novonikolaevka, Mirnoye, Blagodatnoye, Kobzartsy, Knyazhevka and Trudolyubovka.  Inflicted air strikes in the areas of Andreevka, Olgino and Novogrigorevka.  Russians tried to conduct reconnaissance in force not far from Lozovoye.  They fell under the accurate fire of Ukrainian soldiers, suffered losses and retreated chaotically.