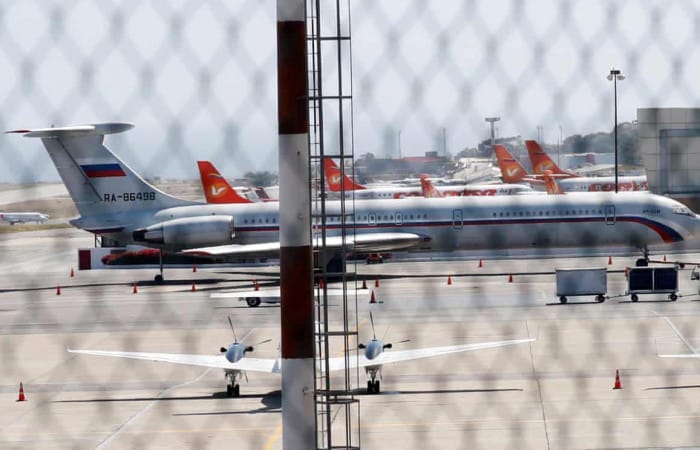 Two Russian military planes have landed near Cracas on Saturday, The Guardian reported. Kremlin’s support to Venezuela is stable, Moscow sent its militaries to discuss training, equipment maintenance and strategy.

The Venezuelan government confirmed in its statement that the Russian aircrafts arrived this weekend as part of ongoing military cooperation between Caracas and Moscow, the long-time allies. The Russian-flagged cargo plane and an airliner were spotted at Maiquetia airport in the vicinities of Caracas guarded by a contingent of Venezuelan national guardsmen.

The Russian troops were accompanied by Chief of Staff of Russian Ground Forces Vasily Tonkoshkurov, that Moscow’s support is set to strengthen Maduro’s position significantly. It poses a major diplomatic and military upset for any US plans to intervene on Venezuelan opposition leader Juan Guaido’s behalf.

Upon arrival of the Russian aircraft to Venezuelan airport, the government said it is part of “ongoing military co-operation” between the two allies. Amid the crisis in the Latin American country, Russia remains a friend for Caracas. The bombers’ arrival came just days after President  Maduro visited Moscow, seeking Kremlin support for his country, whose economy is in shambles and which is deeply in debt to Russia.

Venezuela’s President Maduro has accused the White House’s Juan Guaido of trying to mount a coup against him with the help of “US imperialists”.

The Kremlin believes that an “illegal attempt to seize power” backed by the White House and pledging to do “everything required” to support the legitimate President Maduro.

Phil Gunson, a Caracas-based analyst for Crisis Group, said he expected Maduro’s emboldened administration “to move in hard” on members of the opposition in the coming days.