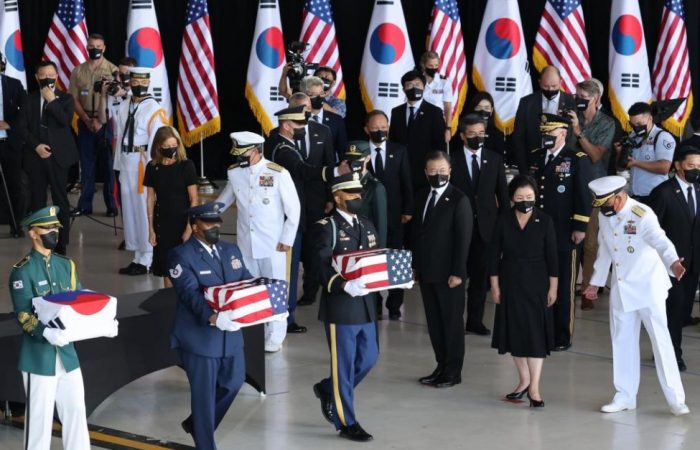 South Korean President Moon Jae-in welcomed in Honolulu the remains of 68 soldiers killed in the Korean War, UPI has learned.

Moon’s five-day visit to the United States includes also taking part in a repatriation ceremony where he repeated his call for an end-of-war declaration on the Peninsula.

South Korea’s President received the remains of 68 Korean soldiers during the handover ceremony at Hickam Air Force Base on Wednesday. The remains of five American soldiers were also transferred to the US officials.

The solemn ceremony became the first-ever event of such a kind. Moon was the first South Korean president to attend the ceremony, which was co-hosted by the Hawaii-based Defense POW/MIA Accounting Agency.

Technically, North and South Koreas remain at war, as the 1950-53 conflict ended with an armistice and not a peace treaty. Moon continued to call for reconciliation even after a recent flurry of weapons tests on the peninsula last week.

While Washington and Seoul have made public overtures to bring Pyongyang back to the negotiating table, Moon on Wednesday reiterated that working together to recover war remains offered an opportunity to restart engagement with North Korea.

“I believe humanitarian cooperation among the two Koreas and the U.S. to exhume war remains will help heal the wounds of the war and build a strong foundation for empathy and understanding,” he said.