Saudi women to attend football game for the first time 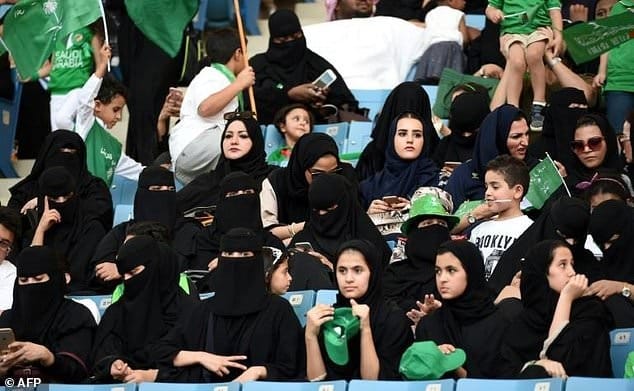 Saudi Arabia is moving towards the different and bright future very fast, the Crown Prince does his best to empower modern Saudi Arabian women. On Friday, women entered a football stadium for the first time to watch a match, and that was the historical moment.

Saudi Arabia, the ultra-conservative kingdom, eases strict decades-old rules separating the sexes, the government has announced a series of reforms initiated by powerful Crown Prince Mohammed bin Salman since last year. It is worth to note that the young royal kept his promises.

The new measure comes after Riyadh, long known for imposing harsh restrictions on women, announced it was lifting a ban prohibiting them from driving as well as reopening cinemas. Youth also wants to be able to go to concerts, drive my car, start a business, mix with the other sex or see a movie. And the youth wants to celebrate the national Saudi culture, cuisine and art – not just Islam.

The Islamic kingdom allowed its women to attend football match last Friday when Saudi Premier League clubs Al-Ahli played against Al-Batin in the Red Sea city of Jeddah. According to Lamya Khaled Nasser, a 32-year-old soccer fan from Jeddah, it was ‘happiness and joy’.

The football match in Red Sea city of Jeddah proves that all Saudis are heading for a prosperous future. Many people are very proud to be a witness of this massive change, undoubtedly. Ruwayda Ali Qassem, a Jeddah resident, is happy to see such a sports event, which is the historic day in the state, which culminates ongoing fundamental changes.

“I am proud and extremely happy for this development and for the kingdom’s moves to catch up with civilised measures adopted by many countries,”

The Saudi government said last week that women would be allowed to attend the second match on Saturday and a third next Thursday. The Islamic kingdom, which has some of the world’s tightest restrictions on women, has long barred them from sports arenas through strict rules that keep the sexes apart in public.