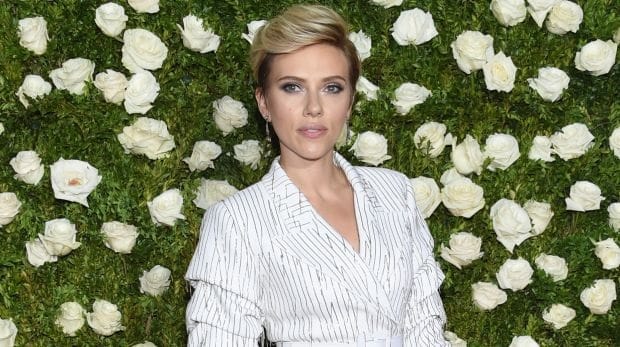 The actress Johansson has been spotted stepping out for dinner in NYC with Colin Jost, the guy who has had to accept being Johansson’s part-time boyfriend for the last few months, the period while Avengers star was finalising her divorce with Romain Dauriac.

The Match Point actress was seen joining Colin Jost and his co-stars on Saturday Night Live at an after-party in Manhattan. Scarlett donned a white tank top as she dove into the back of a car at the end of the night, closely followed by Jost.

The rumoured-to-be-couple kept themselves low key throughout the evening at the glitzy event that celebrated the launch of the new series of SNL. So far, there is no accurate news about the romance between Scarlett and Colin, their relations are a mystery for Hollywood. The only thing is clear that Scarlet Johansson finalised divorce with her second husband after they quietly split last year.

Scarlett and Colin have remained tight-lipped as she worked through her divorce.

Scarlett and Romain about their divorce

Romain Dauriac is the French journalist who met the Amerian actress in 2012. The 35-year-old man said he tired to a husband to the Hollywood star, he added he is sick of following Johansson to film sets with their two-year-old daughter Rose.

Scarlett has a totally different point of view, the actress who used to work as an actress from nine years old, said that she was proud to acting. Scarlett loves to be an actress and to be able to show her daughter that and to have little Rosie come to the workplace and show her mother is an independent woman.

“I think the idea of marriage is very romantic; it’s a beautiful idea, and the practice of it can be a very beautiful thing.”