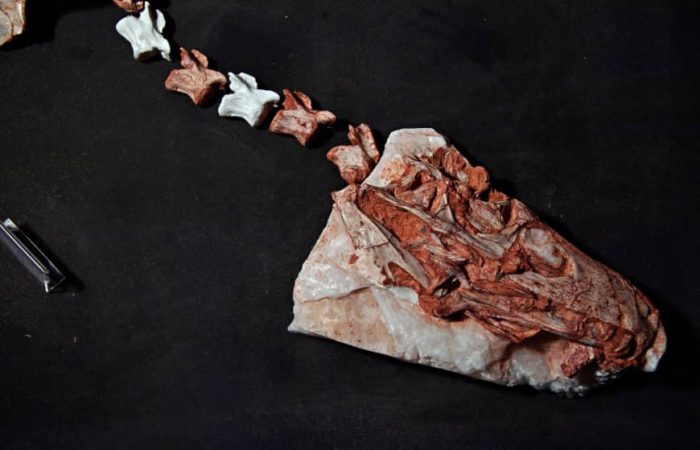 A fearsome dinosaur Gnathovorax cabreirai was the predecessor of famous T. rex, the researchers said in their article published in the recent Journal of Life and Environmental Sciences.

Prior to arrival of the mighty Tyrannosaurus rex, the three-meter-long Gnathovorax dinosaur was the biggest one of its time and also the most ferocious. Accordind to the study, the species lived in what is now southern Brazil and was the king of Triassic Park.

Dating back more than 230 million years, it was one of the oldest and best-preserved dinosaur fossils ever found.

Measuring nearly 3 meters long and having sharp teeths, Gnathovorax was at the top of the food chain, as T. rex later was, says Rodrigo Temp Muller, a palaeontologist at the Federal University of Santa Maria.

The Gnathovorax cabreirai was the dominant creature of the pre-Jurassic period that began roughly 250 million years ago.

“In the Triassic ecosystem, it held a place similar to what lions have today,” Muller adds.

At the Center for Paleontological Research at the Federal University of Santa Maria in Sao Joao do Polesine, the Gnathovorax skeleton is on display in a glass case.

Brazil as the gold mine for palaeontolgists

The palaeontoligsts were happy when the Brazilian pampas — sprawling plains that were then a fertile jungle of trees, mosses and non-flowering plants, showed the signs of Gnathovorax. For the scientists, Rio Grande do Sul state’s vicinities became a gold mine, which reveals many interesting yielding clues to help experts understand that pre-historic era.

The first Gnathovorax skeleton was found in 2014 at Sao Joao do Polesine, a small town near Porto Alegre. That was a bipedal dinosaur that walked on its hind legs and had hooked claws to trap its prey.

During the Triassic era, the continents were not separated as they are now, and dinosaurs were smaller than those that lived later, in the Jurassic and Cretaceous periods.