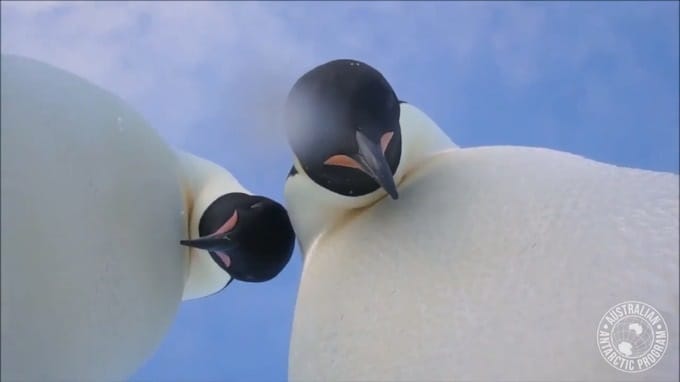 Two Emperor penguins left a couple of wonderful selfies at the Auster Rookery near Australia’s Mawson research station. The penguins discovered the hidden camera and used it in the proper way, that footage was filmed perfectly.

Two penguins have been getting up close and personal with an expeditioner’s camera in Antarctica. The Australian Antarctic Division posted the video on its social platforms and receive thousands of likes.

Eddie Gault left his camera on the ice the penguins quickly approached it and began investigating the equipment of an Australian expeditioner.

“It didn’t take long for the naturally curious birds to seize the opportunity for a selfie,”

explained the Australian Antarctic Division that is responsible for the “advancement of Australia’s strategic, scientific, environmental and economic interests in the Antarctic by protecting, administering and researching the region”.

Emperor penguins are smart animals, they are the largest of the 18 penguin species – adults can weigh up to 40 kg and some can live for more than 40 years. It’s not the first time, of course, that an animal selfie has made headlines but this time is a special footage. While the video at first captures a handful of penguins from a low vantage point, one bird soon waddles over to the camera and — with a single impressive kick — angles the screen to focus only on its face.