Science: ‘Sensual’ Pompeii fresco of Leda and the swan unearthed 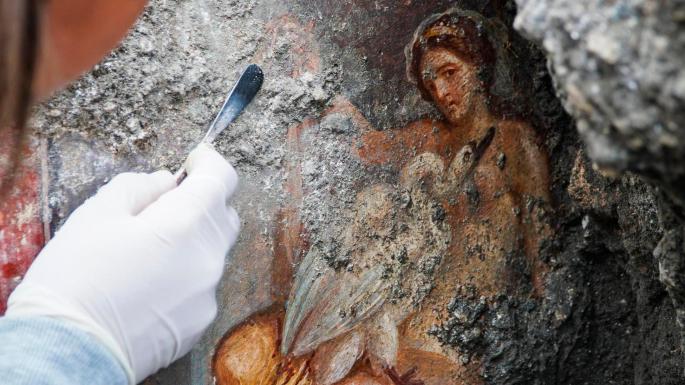 Archaeologists in Pompeii have discovered an explicit iconography’s sample, a colourful fresco depicting a mythical encounter between the Spartan queen Leda and a swan, Xinhua reported.

The enigmatical city Pompeii keeps a lot of secrets, one of them the archaeologists have discovered last week during a new wave of excavations. The fresco was described as “explicit and sensual” and “of the highest quality” by Massimo Osanna, director of the site. According to the experts, fresco “Leda and the Swan” painting is just a unique and exceptional finding.

The fresco laid over the ages under the layers of pumice left by the eruption of Mount Vesuvius in 79AD, archaeologists found the image of Leda glancing coyly at them as she lifts up her robe for the swan.

The discovery was made on Friday during stabilization works ongoing around the 22-hectare area where archaeologists were carrying out new excavations, a press officer with the Pompeii Archaeological Park told Xinhua.

The room with the Leda and the Swan scene was located “next to the entrance hall, where another fresco depicting Priapus (the ancient Greek god of fertility) had already been identified,” Pompeii’s cultural authorities also said.

The painting is rich in colours, and quite explicit. It shows Leda sitting on a chair, and only partially dressed in a cloth, with the white swan nestled on her lap. The woman’s eyes point in a way as to meet the gaze of potential observers.

Leda is an important figure in Greek mythology, she was said to have borne children fathered by the god Zeus, the Greek version of Jupiter, and by a mortal king of Sparta. According to myth, her children included the beautiful Helen of Troy and the twins Castor and Pollux.