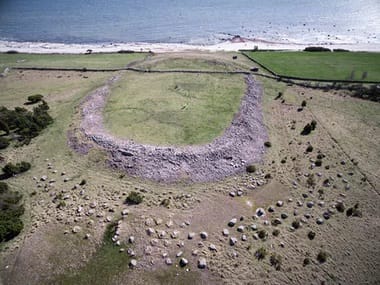 Sandby Borg, an ancient Swedish fort, relinquished the dark secret it has held for 1500 years – that its walls bore witness to a brutal massacre in the fifth century.

An ancient merciless attack’s motive is still unclear, it was probably linked to the chaos that swept across northern Europe following the collapse of the Western Roman Empire. The only sure thing for the Swedish archaeologists is Sandby borg on the island of Öland was an impressive ringfort in the late 5th century. Its walls stood 5 metres tall!

According to the archaeologist Ludwig Papmehl-Dufay, in one house an old man was smashed on the skull so that he fell into the fire in the open hearth, where his body was charred to the bone. In another a teenage boy, possibly trying to flee, tripped over a body lying on the floor, and died where he fell.

Scattered among treasures including Roman gold coins, silver gilt jewellery, silver hair ornaments, intricate glass beads and cowrie shells from the Mediterranean, the archaeologists even found scraps of the last meals, including half a herring still lying by a hearth, and cooking pots where they were last set down until crushed by the collapsing roof.

Ludwig Papmehl-Dufay, a researcher from the local museum, which began excavations after warnings that the site was being targeted by treasure hunters, said that while no written or oral history of the massacre survived, there were persistent stories that it was regarded locally as a dangerous place.

“I do find it most likely that the event was remembered and that it triggered strong taboos connected to the site, possibly brought on through oral history for centuries,”