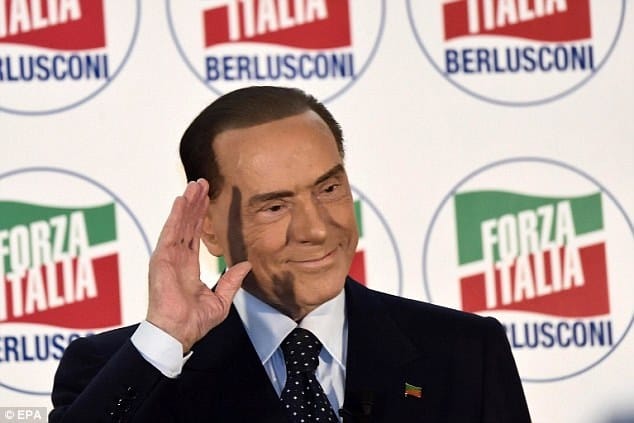 The former Italian prime minister appeared at a Forza Italia party meeting on Sunday, right after the taking part in an Italian chat show on broadcaster RAI.

The longest-serving Italian prime minister showed he is back, the 81-year-old politician was ousted from the country’s top job in 2011 amid Italy’s burgeoning Eurozone debt crisis. On Sunday, he hinted at his coming back to the Forza Italia (Go Italy!) his party. People noted that Silvio is more like a waxwork than ever.

Known to have indulged in plastic surgery and hair transplants in the past, Mr Berlusconi looked frozen in time, with an orange tan and wrinkle-free forehead.

Currently, Mr Berlusconi involved in a legal battle to overturn the ban with some suggesting he could become prime minister again if his political career can be resurrected. He has hired British barrister Edward Fitzgerald QC, who practises alongside Amal Clooney at London’s Doughty Street Chambers, to fight his case.

Mr Berlusconi has made another remarkable comeback, he likes to be at the centre of the attention. On Sunday, the 81-old man who recovered after open heart surgery last year, looked like a waxwork. Despite the rumours regarding the status of his health, Berlusconi and his Forza Italia party is now the lynchpin of a centre-right coalition which is leading opinion polls ahead of the 2018  election.

During the Sunday-night chat show on RAI channel, Silvio Berlusconi said he was looking still at other candidates to become prime minister, presumably in case his bid fails. He noted also that his top pick was a Carabinieri, a military police general, called General Leonardo Gallitelli.

‘I have many names, but there is someone who is very capable … who has had success and is esteemed by everyone, General (Leonardo) Gallitelli,’