Smuggling of Iranian weapons as obstacle in resolving Yemen conflict 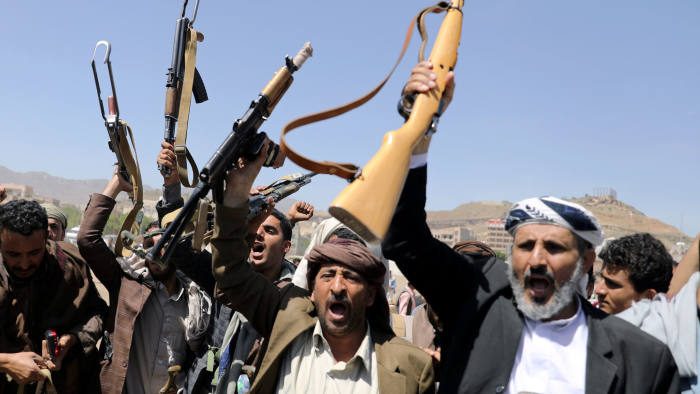 The Iranian support of Yemeni Houthi remains the stumbling block for the settlement of that internal armed conflict. Smuggling of weapon from Iran is still a major hurdle in kicking off any efforts to bring peace in the war-torn country, Asharq Al-Awsat reports.

Iran should to supply the Houthi separatists with weapon, the diplomats insist. The Iranian drones, missiles and other weapon to attack the Yemeni army and people, undermine the diplomatic ways to find a solution for stopping the bloody war.

Yemeni armed forces’ spokesperson, Abdo Majali, told that common smuggling corridors are the Ras Isa, Salif and Hodeidah seaports. All these places are controlled by the Houthis on the west coast.

There is no point to sign any peace agreement until the militias relies on the Iranian support. No such agreement could push forward the peace process.

The Houthis’ ongoing control of the three ports will have a negative impact on the country.

The Yemeni separatists only know violence and there can be no political solution without liberating three seaports. For Yemeni armed forces, it is the top priority — to restore them under the control of the legitimate government.

In his recent statement, Mr Majali also accused Iranian experts in Hodeidah of managing the arms smuggling. Majali explained that the Iranians are in contact with their counterparts in Houthi-held Sanaa to ship the weapons.

The militias use civilian means to move the weapons to avoid them being targeted by military operations. They are sent directly to Saada and Sanaa, which are the main areas were the Houthis manufacture their drones and rockets.

Mr Majali stated that such weapons were not within the Yemeni army’s arsenal and they were introduced to the country after the Houthi coup.

Asked if these arms are hindering the military’s advance in the Nahm and Saada fronts,the Yemeni AF spokesman replied that geographic obstacles were behind the slow march. He cited the mountainous terrain and the Houthis’ heavy planting of landmines.

Moreover, he said that the army was following a military plan and was making a steady advance according to the plan to protect its soldiers.

Despite the complex situation, Yemeni government and the militias are close to the peace deal signing. A power-sharing deal is almost ready, the document would include “the participation of the STC in government.

“The agreement would stipulate that the government return to Aden and that the Security Belt Forces be responsible for security under the supervision of the Saudis,” a source informed about the negotiations told.