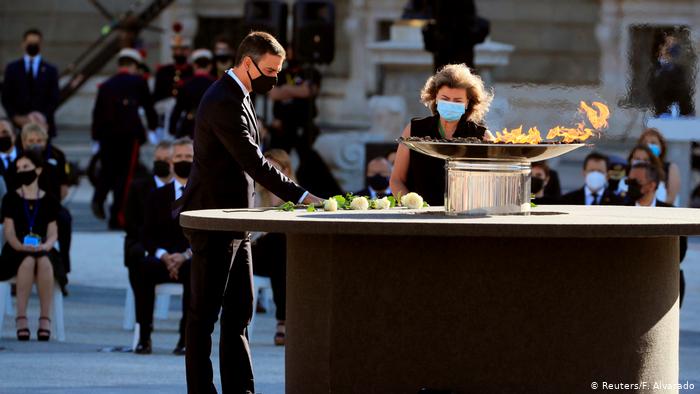 Spain’s ceremony in Madrid dedicated honouring those who have died in the COVID-19 epidemic in the country has gathered many prominent guests. King Felipe VI has led the solemn event with some 400 people attended, while several relatives of victims and health workers were also in attendance.

The ceremony to remember the victims of the pandemic took place in the capital on Wednesday. Spain has one the world’s worst death tolls from the novel pathogen. Since start of the outbreak, many health workers also dying, DW reports.

A ceremony in memory of the almost 30,000 people who have died from the COVID-19 in the country has gathered by some 400 guests and led by King Felipe VI. European Commission President Ursula von der Leyen, European Parliament President David Sassoli and European Council President Charles Michel were attended.

Other prominent guests were the chief of the World Health Organization, Tedros Adhanom Ghebreyesus and NATO Secretary-General Jens Stoltenberg.

Pedro Sanchez, the Spanish prime minister, has voiced the hope that the ceremony will help set the scene positively for a two-day EU summit starting Friday. The summit is likely to see heated discussion over a proposed €750-billion recovery package to support economies of 27 member states. In fact, several EU nations are calling for the money to be disbursed not as grants, but as loans tied to binding economic reforms

In addition to suffering one of the world’s worst death tolls from the disease, Spain is only now emerging from a three-month lockdown with strict restrictions on people’s freedom of movement.