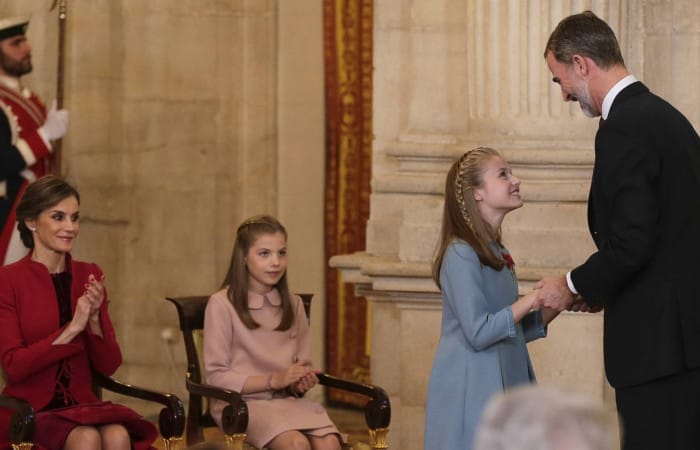 To be a princess is not too easy but King Felipe’s eldest daughter copes with it very well. This week, Leonor, the heiress to the Spanish throne, made her first public speech, reciting an article of the Constitution on the day of her birthday, El Pais reported.

Princess Leonor turns 13 on October 31, the teen took one step closer to the throne. In 2018, Zarzuela Royal Palace has decided that it is time to launch the elder daughter’s public life as a princess. Princess’ 13th birthday was chosen to enshrine her institutional status.

During 2018, King Felipe VI has started Leonor’s career as heir to the throne by giving her the Order of the Golden Fleece, an “element of tradition, continuity and institution.”. Traditionally, thirteen years is an age when the infants are starting their first public appearances. The king described the giving an Order as a “symbolic and very important step,” one that is a reminder of the “demands that come with being the Crown Princess.”

For embracing the role of princess, Leonore has chosen a public speech, the stage for it could not have been apter: the commemoration of the 40th anniversary of the Spanish Constitution. The13-year-old Leonor seemed unperturbed in her first official speech. With a smile and a strong voice, she reminded the audience that the “political form of the Spanish state is the parliamentary monarchy.”

Speaking at the Cervantes Institute, before representatives of the Constitutional Court and the Supreme Court, Leonore read the first article of the historic text: “Spain is established as a social and democratic state, subject to the rule of law.”