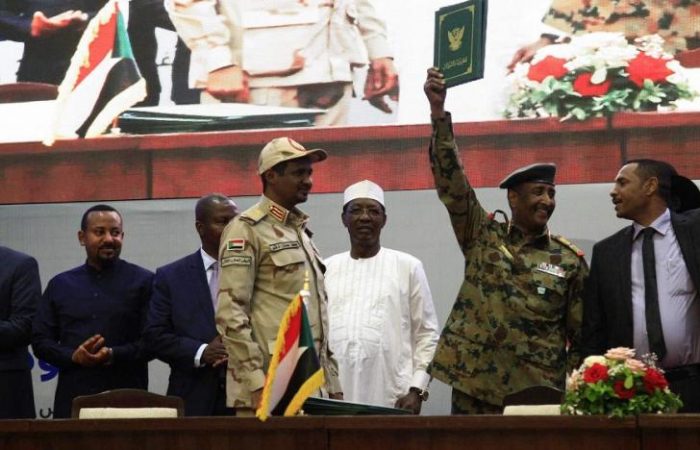 Sudan’s government has finished the signing the historic power-sharing agreement on Saturday, that proves the stability of African country was integral to the region, Asharq Al-Awsat reported. The deal was signed between the ruling Transitional Military Council and the Forces of Freedom and Change.

Saudi Crown Prince Mohammed bin Salman congratulated Sudanese officials during the phone call on Sunday. Saudi’s Deputy Prime Minister and Minister of Defense joined the royal congratulations to head of the sovereign council in Sudan, General Abdul Fattah al-Burhan, and leader of the Forces of Freedom and Change, Ahmed Rabie.

The stability of Sudan was always integral to the region, said Saudi Crown Prince and assured the Kingdom’s support for Sudan and its people to enhance security and stability in the country. The signing of the agreement becomes an important move in keeping stability in the region.

The historical document establishes an 11-member joint military and civilian council to rule for a little over three years until elections can be held. An agreement will also establish a Cabinet appointed by the activists and dominated by civilians, and a legislative body.

After signing the document, the Organization for Islamic Cooperation Secretary-General Dr Yousef bin Ahmed al-Othaimeen stressed that the deal represented a solution for Sudan to end its past crises and way forward to shaping its future.

Saudi Arabia continues to support stability in the African region

On Sunday, Saudi royal also telephoned Ethiopian Prime Minister Abiy Ahmed to express his appreciation for the role played by his country in bringing the Sudanese parties together.

Crown Prince Mohammed bin Salman had a phone conversation to head of the African Union Commission Moussa Faki to offer his congratulations on the signing of the agreement.

The legally-binding document is one of the most anticipated deals, which paves the way for a transitional government and eventual elections. It provides for the sovereign council as the highest authority in Sudan but largely delegates executive powers to the cabinet of ministers.

An aide to the Arab League chief Khalil Ibrahim al-Zawadi hopes the Sudanese people “were capable of overcoming the challenges, building their country and bolstering its security and stability.”