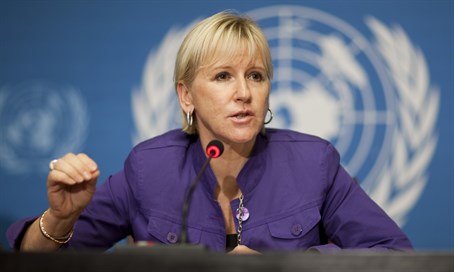 Sweden refuses to sign the UN nuclear ban treaty because the international legal-binding document is not ready «in its current form», APNews reported.

Sweden’s foreign minister Margot Wallstrom confirmed on Friday that the text of the UN nuclear ban treaty requires the finishing touches. In particular, Ms Wallstrom pointed the text of The Treaty on the Prohibition of Nuclear Weapons (TPNW) has no clear definition of nuclear weapons and “ there are a number of issues that must be answered.”

During Friday briefing, the Swedish foreign minister explained the country’s position regarding the UN convention. According to the minister, there is no majority in Sweden’s parliament to sign the nuclear ban treaty. The country’s two-party, center-left minority needs the backing of a majority to sign it.

Despite the refraining to sign the TPNW convention, the Swedish government will continue the nuclear disarmament process and will continue “to work for a ban on nuclear weapons” as an observer. Over decades, Sweden and its neighbours Norway and Denmark are excellent UN partners, mediators and observers when it is about peace or disarmament process.

According to the Foreign Ministry, Sweden’s goal is clear: the Scandinavian country traditionally has a strong voice in the world for a nuclear-free world.