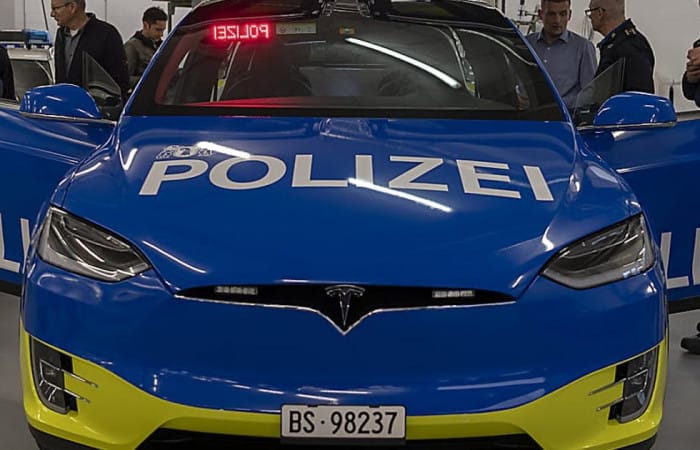 Basel decided to equip its city police with Tesla electric cars, the arrival of the first new autos was also widely covered, The Local Switzerland reported.

The Swiss canton of Basel–Stadt have finally been given two Tesla patrol cars. This week, the pair of Tesla Model X-100D hit the streets of Basel, another five electric cars planned to arrive soon. Basel municipality’s decision to buy seven Teslas for the police caused a stir on social media, the news sparked global interest: such an electric fleet’s total price tag was just under a million francs.

Another sensitive moment is data protection. The electric Tesla Model X-100D cars were confined to barracks because of data protection concerns. Local justice and security agencies were worried that sensitive data could be transmitted to Tesla, given that the emergency response vehicles are connected to the Internet.

Fortunately, after working through a series of issues with Tesla, Basel’s data protection agency has now given the police the all-clear to use the vehicles – as long as certain conditions are met.

In a report, the canton’s data protection officer Beat Rudin said he was satisfied potential data protection issues related to the transmission and storage of video and audio recordings, and of images as well as vehicle location data had been satisfactorily resolved.

In his report, Rudin also noted dashcams would not be used in the new Tesla police cars and recommended that the vehicles’ Tesla Sim card be replaced by one belonging to a Swiss telecommunications provider.

Tesla company confirmed that this was not necessary as it already provided all of its European customers with a high degree of privacy protection, completely in line with the EU General Data Protection Regulation.