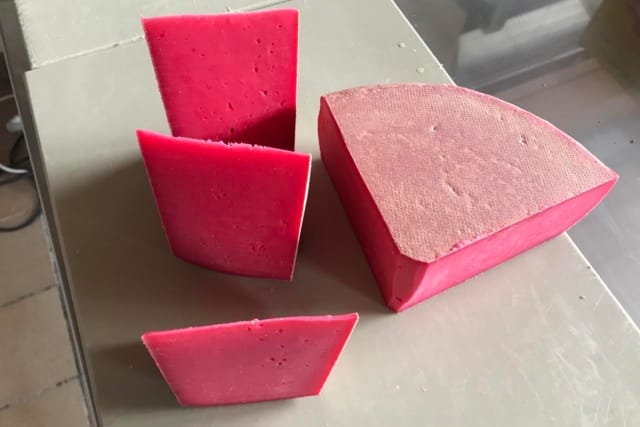 The appearance of pink chocolate made happy all millennials last year but there is also a pink cheese, The Local Switzerland reported on Thursday. A Swiss cheesemaker has produced a pink cheese for a customer in China, Pink Queen was invented specially for one demanding customer in Hong Kong.

The world-famous Stadlemann cheese factory in the town of Ganterschwil did its best to produce the new kind of cheese. The experts spent seven months developing the unusual-coloured cheese tagged as Pink Queen especially for a businessman from Hong Kong who requested an original Swiss cheese – but in pink.

“The biggest challenge was finding a natural colourant that didn’t alter the maturation process of the cheese,” cheesemaker Jürg Stadelmann told. He described The Pink Queen as a mild cheese created with Asian tastes in mind and heart.

It was a real challenge – to colour cheese

The cheesemakers often produce cheese of orange or green colour with the help of natural colourants like powdered paprika pepper or estragon. But making cheese of pink colour was a real challenge, confessed the experts. Initial attempts with beetroot and strawberry didn’t work but finally a solution was found that didn’t affect the taste, Stadelmann explained.

At last, the solution was found but the cheesemaker won’t reveal it to avoid the copying idea by their competitors. Stadelmann went on to say there are currently no plans to make cheeses in other colours.

“We are just happy that the cheese came out well and met our quality standards,” he said.

Stadelmann added the restaurants in Switzerland welcomed the unusual-looking cheese and showed their interest n buying it. After all, the cheese looks and tastes great. The cheesemaker told FM1 that there had been no reaction yet from the customer in Hong Kong as the cheese was still on its way there.