Switzerland: Tourists airlifted out of Swiss ski resort of Zermatt 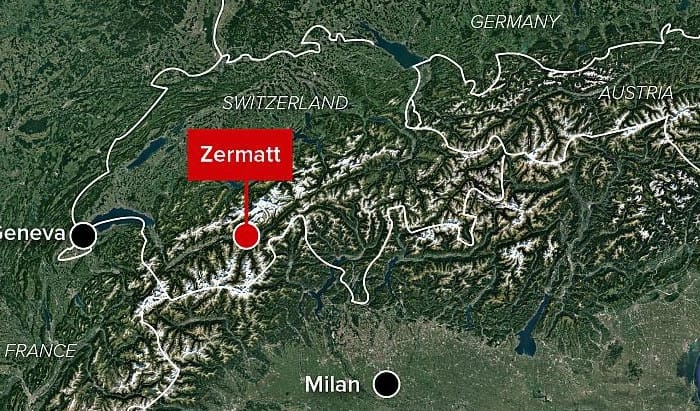 The Swiss ski resort Zermatt Matterhorn became the trap in the mountain village for two days by heavy recent snowfall and an exceptional risk of avalanches. The police said that tourists airlifted out of Swiss ski resort.

The clear up operation in Zermatt is going on the second day in a row, Swiss mountain resort informed on its website that ski slopes, hiking paths and cable cars around the village remained closed. The management and police advise visitors to follow instructions and stay at home so as not to hamper the ongoing clear up operation.

Janine Imesch, a spokeswoman for the resort, said there was no immediate risk to “around 13,000 tourists” who remained there, approaching Zermatt’s maximum capacity. According to region’s president, Romy Biner-Hauser, the avalanche risk around Zermatt and neighbouring resorts in the southwestern Valais region, was raised to its maximum level of five on Monday night.

Meteorologists about the recent avalanche in Zermatt

The Swiss federal institute for forest, snow and landscape research, WSL, warned on Monday night that fresh snowfall coming on top of quantities of old snow that had fallen over the Christmas and new year holiday period could provoke “numerous large and, in many cases, very large natural avalanches”.

It said such avalanches could reach “an exceptionally long way” and that exposed buildings and transport routes were endangered. “Extensive safety measures are to be maintained” particularly early in the day, it advised, although avalanche activity should decrease later.