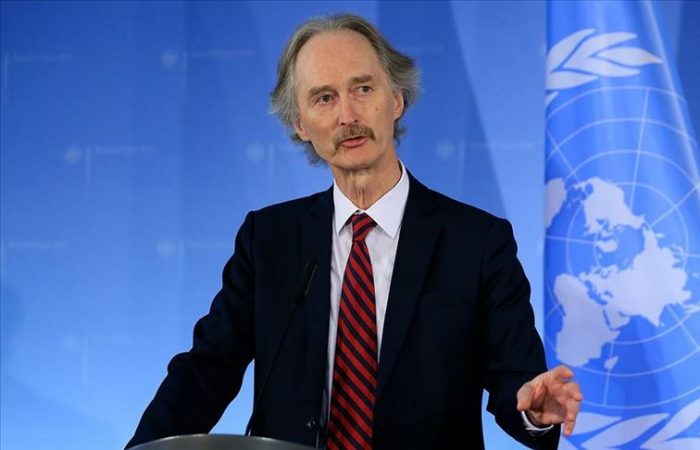 The United Nations special envoy on Syria, Geir Pedersen, has reported on results of the third round of peace talks. The warring sides showed a “respectful tone”, said the diplomat.

While Syria peace talks are continuing, the tone of the warring sides is changing, and that would enable the finding of an agenda for the next meeting later this year. As Mr Pedersen said, when the UN and sides have an agreement on the agenda, an exact date for the next meeting will be set.

Commenting on the latest developments on Syria, the UN diplomat hoped they would be in late September or early October. Pedersen’s news conference followed four-days of talks delayed by some delegates testing positive for the COVID-19 virus on the first day, Monday.

The previous round of talks in Geneva late last year had failed due to a failure to agree on the agenda between the Syrian regime side and the opposition.

The UN special envoy on Syria said that he is still trying to build trust between the sides after nearly 10 years of war. Now, he is extremely pleased to hear the two co-chairs saying very clearly that they thought also there were quite a few areas of commonalities.

“And what I’m looking forward to is hopefully then when we meet again, that we will be able to build on those commonalities and bring the process, further forward,” added Pedersen.

Permanent cease-fire as the central topic of the peace talks

Currently, there is no permanent cease-fire in Syria, so as long as there is violence and repeated military clashes, the warring sides will not see the political process moving fast.

“Their duty is to push for a full cease-fire in Syria, a permanent one as he noted that Forces from Russia and the United States are in Syria as well as regional players such as Turkey and Iran,” the opposition co-chair of the talks Hadi al-Bahra said.

With a permanent ceasefire, the whole peace process will be moving faster because there is no way for Assad forces to achieve a final victory on military terms.

Pedersen said that he addressed the UN Security Council recently in New York and saw “there is strong and united support from the Security Council” on the current peace round.

“All 50 members have expressed strong support to the work of the constitutional committee, and also to the fact that we would be convening here again in Geneva on the work that started on Monday. This support, I think, is extremely important,” said the UN envoy.

Since 2011 when the internal armed conflict started in Syria, over 5 million civilians have become homeless, the UN reports said.