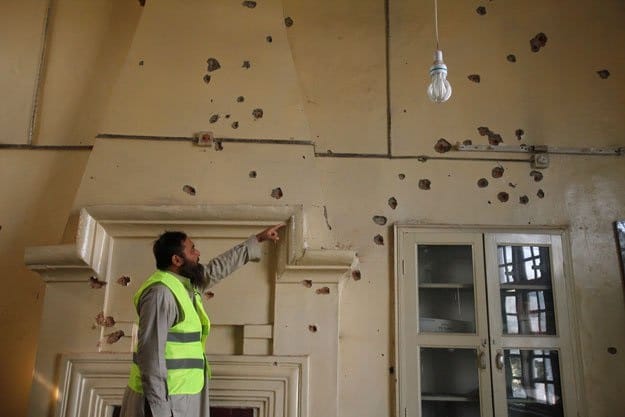 Taliban suicide bomber killed nine and wounded 32 people in the assault early Friday morning claimed by the Tehreek-e-Taliban Pakistan, the outlawed umbrella of terrorist groups. According to the local police, among injured was a police sub-inspector and two army soldiers.

After the tragic incident, the police cordoned off the premises for the neutralising the rest of the terrorists. The bombers’ aim was to methodically kill anyone and everyone, but luckily in the college premises were a few students. Unfortunately, one of the bombers had managed to trigger his vest and killed at least nine innocent people and injured dozens.

Briefing the media after the operation at the Central Police Office, along with Health Minister Shahram Taraki, IG Mehsud said the police force reached the site within four minutes owing to coordinated efforts. At 08:40 – within four to five minutes after call – special police forces were inside the university.

Police said at least three militants opened fire at security guards near the gates of the Agriculture Training Institute, injuring one person before making their way inside and targeting student accommodation.

“Some students got out to watch the gun-battle and they were shot by the terrorists,”

Hours after the army took over the operation, the military’s media wing, the ISPR, said the operation has been completed and all terrorists have been neutralised.

The experts warn that violence erupted over the weekend after police and paramilitary forces launched a bungled attempt to clear a sit-in, igniting fresh demonstrations in cities across the country. The provincial police chief said a huge cache of weapons and explosives was seized during the operation including three suicide vests which the terrorists could not detonate.

“Around 20 hand grenades, AK-47 assault rifles and IEDs (home-made bombs) were also recovered in the operation,”