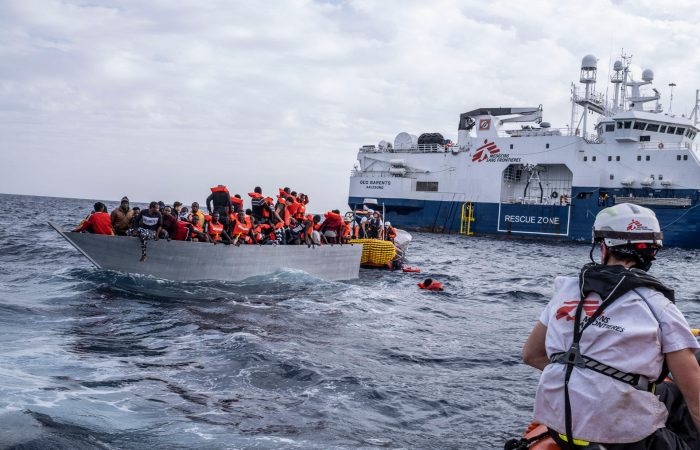 The migrant boat from the war-torn Lybia was saved by the Médecins Sans Frontières (MSF) teamon Tuesday. The operation sucsfully ended less than 30 nautical miles from Libyan shores in the Central Mediterranean Sea, according to the official site of the MSF.

On 16 November, during a difficult search and rescue operation less than 30 nautical miles from Libyan shores in the Central Mediterranean Sea, the Médecins Sans Frontières (MSF) team on board search and rescue vessel Geo Barents found 10 people dead in the lower deck of a severely overcrowded wooden boat.

Alerted by crossing support hotline Alarm Phone and civilian aerial reconnaissance plane Seabird to the boat in distress that was taking on water, the Geo Barents reached the boat too late to prevent this tragedy.

Survivors told that these people had spent more than 13 hours on the cramped lower deck of the boat, with a high level of intoxicating fuel smell; the people are believed to have died from suffocation.

“After rescuing all 99 people, we’ve seen the 10 bodies on the bottom,” Fulvia Conte, MSF Deputy Search and Rescue team leader on board the Geo Barents, said.

According o the MSF, it took us almost two hours to retrieve migrants and to bring them on board, so they can have a dignified burial once arrived onshore.

The MSF tean has to bring 10 dead bodies on board, we are once more witnessing Europe’s unwillingness to provide the much-needed dedicated and proactive search and rescue capacity in the Central Mediterranean. As Caroline Willemen, MSF Project Coordinator on the Geo Barents, said, people endure horrific human rights abuses in Libya and often their only escape is to flee and take an incredibly dangerous journey across the Central Mediterranean.